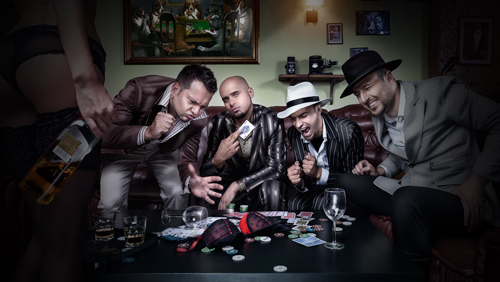 I like to play poker. I’m not going to say how well I play poker, since I’m a registered Republican and we all know how the IRS feels about that. But I do play all across the country, since I travel extensively for my job in inventory management for Grainger.

When you play poker, you’re supposed to watch your opponents carefully; to pick up tells and betting patterns, or simply to understand at what level the other players are playing the game. But, it’s also rather fun to watch the other players, simply to view the endless stupidity so many recreational poker players love to show off. And, no matter where I go, it seems like the same players are always there. They may look different, and they may dress different, but they play the same, making reads much easier. As such, for poker players everywhere, here is a guide to the perfect poker table, full of the players I see almost every session, no matter where I roam.

Quote: “How can you call with that hand in that spot?”

My Read: “A little information is a very dangerous thing.”

I love these guys. They made it through chapter three in Super System 2, so they know to play aggressive, raise on the button, and…well, that’s pretty much it. They seem shocked – shocked! – that good players begin to figure that they may, on occasion, be full of shit. But nothing is better than when one of these aggrodonks three-bets into a calling station, who check-calls all the way down with top pair and a weak kicker, and then hits the roof. “How can you call with that?” they ask, pained. “He’s been calling with that all night, you dumb shit,” I want to reply. But I don’t. You want to learn poker, finish the goddamn book.

My Read: “For the love of God, please let me get at him before he goes broke.”

The Drunk is kind of terrifying, in his own way. He’s impossible to read; it’s very hard to put a player on a hand when you’re not entirely sure that he even knows what his hand is. He’ll check-raise you with a wired pair of 6’s because a 9 hit on the flop and he thinks he has three of a kind. He’ll call an all-in with queen-eight off-suit because, “Fuck it, I came here to gamble.” This is all well and good, assuming your hand holds up. But these guys always seem to go on a massive run, building a stack so big that the rest of the table is staring like a submarine crew in a strip club on their first day back on dry land. Of course, he pisses the stack away as quickly as he builds it; the catch is to meet him on the way down, not the way up.

Seat 3: The Guy With Sunglasses

Quote: “You don’t play the cards, you play the players,” or some other bullshit he heard Norman Chad say on a WSOP telecast in 2008

My Read: “Do you really think I need a tell?”

Another one of my favorites. We’re playing 1/2 no-limit hold ’em in a tribal casino on a Wednesday night and Phil Hellmuth Jr. breaks out the shades to protect his eyes from the other players. Hey dickhead, here’s a tip: no one is reading your eyes. This isn’t the final table at the Main Event; it’s a bunch of cowboys, roughnecks, and retirees who are spending more time watching the waitress’ ass and the scores on the ESPN ticker than the other eight players at the table. And, by the way, the sunglasses aren’t hiding the fact that you just weakly pushed eight whites into a $35 pot in an obvious attempt to protect your flush draw. Next time, wear gloves too.

Seat 4: The Guy Who Thinks Poker Should Be Fair

Quote: “I don’t know why I even play this game.”

My Read: “Wait until the river; he’ll fold out of turn if he misses.”

My favorite move of this player is when he gets disgusted by a bad player. “Can you believe he called a $25 raise pre-flop with nine-three suited?” he’ll ask. “I can’t believe he won that hand. What a donkey.” This is bad, how? Would you rather we all played perfect poker and just passed chips around until the rake ate up everybody’s stack?

Seat 5: The Guy Who Would Win Every Hand If Only He Had The Hand He Had Last Hand, or If He Had Clubs Instead of Hearts, or If The Flop Had Been Completely Different, or If He’d Been Dealt His Favorite Hand, or If He’d Called That $230 All-In with 7-high And A Backdoor Flush Draw

Quote: “If that ace had been a king, and another five had come on the river, and you had nines instead of sevens, we totally would have hit the Bad Beat.”

There’s a very good young poker player who plays the casinos in the OKC area. He is a very typical poker pro: learned the game online, plays tight, studies his opponents, says little. He’s about 5’6” and about 150 pounds. He is very nice. We were playing one night and one of these “I totally would have won!” guys was chirping in his ear every hand for about an hour. Finally, the young man just turned very quietly, and very firmly, and said, “I…I just don’t fucking care,” and put in his headphones. I got up, walked out of the room as fast as I could, and burst into laughter-induced tears before the door even closed.

Old guys never bluff. You know that, right? They never bluff. They’re 75 years old, they’re retired, and they don’t have anything else to do but sit and wait for queens, kings, or aces while they drink free coffee and talk about the weather.

I was playing 1/2, a bit short-stacked, on the button in a straddled pot. Four limpers, comes to me with nines. I make it $25 at a tight table, figuring there’s a decent chance I’ll take the pot down pre-flop. Old guy limp/calls from under the gun. Flop comes jack-nine-four. Jackpot!

Old guy bets $25 out of position. I shove over the top for $100 or so, figuring he might have slow-played queens or will call with ace-jack. He thinks for a few seconds, then calls…with pocket jacks. Happily, I spiked my one-outer on the turn, but the moral remains clear: those guys never fucking bluff.

Quote: “You have got to be fucking kidding me!”

My Read: “I’m calling with anything against that poor son of a bitch.”

There is a local player here who simply cannot win. He’s not even that bad of a player; he’s not good, either, but he’s your standard local 1/2 donkey who knows not to shove with every flush draw or call with a gutshot. But, no matter what he does, he cannot win. I’m pretty sure I remember a player who was drawing dead somehow sucking out on him – on the turn, no less. He could flop quads, lose, and miss the bad beat jackpot because only one of his cards played. And yet, he comes back. It’s either proof of the resilience of the human spirit or the sheer delusion of the gambler.

I’m just fucking with you. There’s never a good-looking woman at a poker table.

Quote: “How the fuck can you deal four clubs, you sack of shit dealer?”

My Read: “I hope I take his stack and he takes a swing at me. That would be awesome.”

I’ve lost my temper at a poker table a couple of times. It’s usually brief, and once it’s over I try to at least say, “Well, nice hand,” to make up for the fact that I just stood up and screamed, “Did you really fucking call me there with a gutshot to the ass end of the straight after I put in my entire stack in when I’ve folded every hand for the last hour and a half? What are you, fucking stupid? I hope you die in a fire.”