Home / Poker / Confessions of a Poker Writer: The Hendon Mob 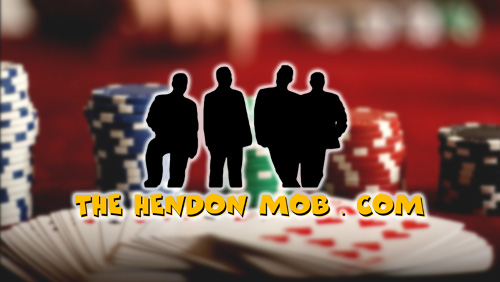 I don’t mind admitting it; I used to wet my knickers at the thought of the Hendon Mob.

There are three memories that find their way out of the drug fuelled television haze of my youth: The Hit Man and Her, Eurotrash and Late Night Poker – the only three television programs that would be worth watching after a night of amphetamines and K cider.

I would have a little come down boogie to The Hitman and Her, try to pump some life into the shriveled peanut watching Eurotrash and then settle down to watch these dodgy looking characters playing poker for a living. It connected to me because I like competition and Late Night Poker seemed like a cauldron of competition back then.

Dave ‘Devilfish’ Ulliot apart, the members of the Hendon Mob are the only players that I remember from the series. Now this is an important point. Isn’t this the whole point of the casting for the show? That the chosen few have the power to break into your mind and set up camp?

They all connected to me and a seed was sown.

Ross Boatman, in particular, was a bit of a legend in my eyes. He wasn’t just a poker player he was a movie star – a true Hollywood legend. It didn’t matter that at this time he had never appeared in a movie, and that the only time he had been to Hollywood was to play cards. He was the star of London’s Burning and that show was so hot in the UK that it was Hollywood enough for me.

Back to the 21st Century and I was figuring out how to get paid for my writing work. I had a monthly column in Poker Pro Europe (PPE) magazine, but they weren’t paying me for the work.

So how was I to get paid, and where could my writing get the most exposure?

They had one of the most popular poker sites in the world and they were obviously stinking rich. Ross Boatman was a superstar actor and the rest of them were winning millions playing poker.

Surely these guys were the answer?

So I wrote to them and asked if I could write for them.

The guys have decided we are OK to go ahead and publish your articles. Do you want to send us some with the order in which they are to be published? I would guess we would want to publish one every 2 weeks, or maybe weekly if you are writing that many.

“The guys have decided we are OK to go ahead and publish your articles.”

Man that line got me.

I was so excited when I told my Mum, because she was a huge London’s Burning fan.

“They sound like a bunch of wankers to me.” Said my Dad.

The first time I actually saw one of them in the flesh was at the Empire Casino in Leicester Square. I had qualified for the £1k event at the World Series of Poker Europe (WSOPE) and Barny Boatman was seated at the table next to me.

“Ross Boatman’s brother is seated next to me,” I texted to my Mum.

My Mum texted back: “Get his autograph.”

I decided to give the autograph request a miss, but I did keep staring at him hoping that he would recognize me front the site, but he never did. He did stare back few times, but was probably thinking what does this freak keep looking at me for?

It wasn’t until the European Poker Tour (EPT) in Vienna that I finally plucked up the courage to introduce myself to Barny. He shook my hand and told me that he liked my stuff. I was over the Moon until he started calling me Daniel and I realize he was probably just being polite and didn’t know me from Adam.

Ok, so maybe I wasn’t the fifth member of the Hendon Mob, but I was still writing for them and that was good enough for me. The only problem I had was they were not going to accept any payment for my work.

I was now writing for PPE and Hendon Mob, but not getting a bean for it. With this in mind I decided to withhold original content from the Hendon Mob and just give them the work that I had done for PPE.

It was a little naughty but allowed me to spend more time trying to branch out into different areas of the poker world, and nobody really cared.

The first article I shared on the site was called Zombieland and it was a story based on poker game I had played in where this guy had shit his pants. I was mesmerized how poker touched so many levels: from the high stakes of Bobby’s Room to the dirty shitty underpants of my Zombieland.

I started to get good feedback on my articles and one guy in particular showed an interest in my work. His name was the Milkybarkid and he said he loved my gonzo style of writing and that I was the Welsh William S. Burroughs.

At that time I thought Gonzo was a member of the Muppets and didn’t have a clue whom William S. Burroughs was. I decided to buy Naked Lunch and after reading the first two Chapters I stopped because I thought it was nothing but lines after lines of nonsense.

Could I please be the Welsh Ross Boatman I thought.

This is how people can change your life without you ever meeting them.

It turns out that the Milkybarkid was a real person called Harry Mapston and he worked for BLUFF Europe magazine. I have never met Harry but should I one day find myself receiving an Oscar from Ross Boatman then he will be credited for help create the monster you see today.

It was Harry who gave me the initial idea to keep going writing with a gonzo theme (something I still do to this day when I can) and then most importantly he asked me to write for BLUFF Europe.

Are you interested in writing for Bluff Magazine at all?

I like your stuff, so I’m sure our readers would too.

After just a few months trying to break into the business I was about to get paid.