Home / Poker / A Life Outside of Poker: Philipp Gruissem – An Effective Altruist 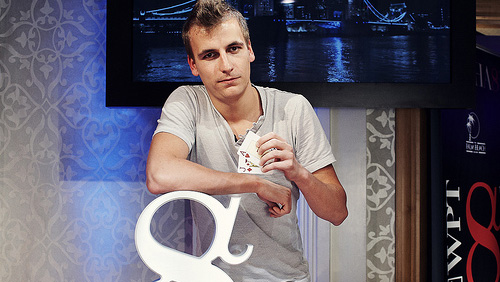 Philipp Gruissem is one of the most successful live tournament poker players of recent times.

He has excelled in the High Roller tournaments that have become such a prominent fixture in the annual live tournament calendar earning over $8m in the process, including back-to-back victories at the World Poker Tour (WPT) Alpha8 contests in London and St Kitts.

Whereas most players will attribute their success to a combination of skill and luck, Gruissem chooses to believe that his success has come about as a result of his decision to become an effective altruist and that is the topic of discussion on today’s Life Outside of Poker.

At what point in your life did you learn about the power of giving in order to receive?

“I started learning about it two years ago when I was reading a lot about Buddhism, who always say that a lot of happiness comes from giving to other people. Then some friends got into the Effective Altruism movement and it made sense for me. So I got into it, started donating and I am very happy right now.”

What is the Effective Altruism Movement?

“The movement started in San Francisco and is now known the world over. I support their spot in Switzerland where they are trying to build a movement to motivate people to be an effective altruist. One of their goals is to open people up to the possibility to choose a career and then donate some of that income to a charitable organization.

“When you think like this it makes sense to take a job where it is just about earning money. A lot of people who want to do a lot of good on this planet are perhaps working at the front line and helping organizations, but not making a lot of money. This could be a waste of their potential because they could earn more money doing something else that can be used to greater effect. Then you have people who earn large amounts of money but don’t want to give it away.

“It’s about bringing those two factors together, to make a more positive impact on the world.”

So you believe in the philosophy that your happiness in somehow tied in with your generosity?

“Yes I think so. The happiness that I am feeling and the motivation it has inspired is huge. Everybody gets to the point where they start questioning what they are doing and why? When you start asking these sorts of questions, and understanding the answers, the more motivation you get through giving.”

How has that manifested itself in your life? Have great things also happened to you outside of poker?

“My life is going very well right now. I have more motivation and fun doing these things than ever before. Nothing is heavy or tough for me anymore. Everything comes much easier for me these days.”

Were you taught about philanthropy when you were being raised?

“It’s not something I learned from home, and it’s rare that people will learn this from their parents. I hope to be a part of that change in the future.”

A lot of the businessmen you compete with on the High Roller circuit are philanthropists, how much have they influenced this change in you?

“When we first started playing with them I never thought about it, but now I am focused on this I hear people talking about it all of the time. I see big potential in the poker community to pair up with the businessmen and if these people come together at the right time I can see something really big developing in the future.”

How difficult is it to find the right charity?

“I think that’s a big problem. I can recommend the site givewell.org. They rate all different charitable organizations from around the world for their effectiveness. For me it was an important factor to have the highest rate of dollar you donate, to the time a child gets to spend in school – that’s my personal definition of how my money should be invested.

“Another way they rate effectiveness is by reducing suffering. It’s very tough to decide what route to take but this website will help you a bit. Do you want to reduce suffering on the planet immediately, or in the future by changing the mindset of the people who are going to university, which is what I am doing with the effective altruism.

“The first charity I am working with deals with reducing suffering right now, and that’s the schistosomiasis control initiative with a very good ratio of dollar and suffering you reduce, and the second one is trying to get the students in university to donate some of their income in the future, and that’s done through effective altruism.

“Today’s students will rule the world tomorrow. The world will change drastically in the next 20-30 years – in ways we cannot imagine. We might have totally different causes for our suffering and even if we have better use of our resources, so we could give everyone what they want in the world through technology – if the mindset doesn’t change it won’t happen.

“The schistosomiasis control imitative was rated really well on the website I mentioned and it was the best ratio of dollar you spend v hours at school for a child. If the kids have this disease they cannot go to school, and the treatments are extremely cheap.”

How much are you donating to charity right now?

“I am donating 10% right now, but in the end it will be a much higher number. I think right now it’s important for me to invest my money wisely so I can donate more money in the future. I am in a good spot to make a lot of money from the money I already have, so I want to secure my future and then I can live without going broke and I see no reason to keep anymore money for the rest of my life than what I need.

“I don’t want to give my kids a fortune, I see no reason for that, so in the end the actual number I donate will be much higher.”

Do you think the poker industry could be doing more work for charity?

“On the one side I really see that something is moving and people are getting more and more into it, but it’s just started so we are not doing enough yet…but I see huge potential.”

Did you have moral issues with being a poker player before you became an effective altruist?

“In the first place it wasn’t a problem. I was young and didn’t care about anything, so I just enjoyed life, but after a couple of years once you have enough money so that your lifestyle doesn’t change through wins and losses – which is true for me – then you ask yourself, ‘what am I doing this for?’ To have a bigger bankroll makes no sense. If I just want to live on a beach I could just move to Thailand and live very easily, so what am I living for? I need a different motivation than money because it’s just not that important to me.”

What do you say to people who don’t believe they earn enough money to give to others?

“Everyone who is listening to this are from what I like to call the first world. Almost everybody is in the top 10% of the world population and the problems they have are very small compared to the problems that some people have in the third world.

“I see the world like a lottery. You have no influence over where you will be born, so you have to create a system so that it doesn’t matter where you are born in the world…you still have the basic privileges in life.

“People don’t understand how much power you have with one dollar. In the U.S you can’t do anything with a dollar, but one treatment of schistosomiasis is exactly one dollar. If you don’t splash around you can change so much and everyone needs to be aware that the gap is so big and that the dollar can be used so more effectively in worse areas.”