Home / Business / Is sports sponsorship the only option? 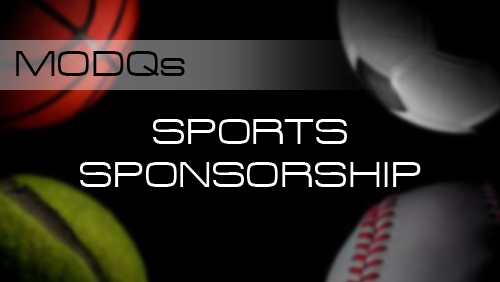 Sport and gambling go hand in hand. You can go all the way back to the Greco-Roman period and still find records of gambling on both animal and human contests. While we’ve come a long way since placing wagers on cockfighting and the early forms of wrestling the relationship between the two areas has remained strong, if not too strong in some instances.

As a result, it comes as no surprise that when gambling companies of all kinds look to marketing opportunities, particularly in the form of sponsorship; sports teams, leagues and media coverage are go-to sectors.  Betclic and Mansion Casino have splashed out $21 million and $64 million respectively while bwin has paid up to $98 million for the pleasure of working with Manchester United.

Understandably, the majority of sponsorship deals follow the masses to football but you’d be hard pushed to find any form of professional sport taking place without a gambling operator’s name being too far away. Whether it be one of bwin’s mammoth shirt sponsorships or Betfair placing QR codes on the British women’s volleyball team’s bikini bottoms, betting companies are always looking to place themselves in front of sport audiences.

The huge appeal and widespread consumption of sports media by an audience that largely fits the profile of online gamblers makes these kinds of deals clear winners. But with all operators heading in the same direction, competition is increasing along with budgets. It all seems a little lazy. Search for a high profile club or event, slap your logo on it and watch the new customers roll in. But are there more diverse opportunities out there?

Clearly it makes a great deal of sense for bookmakers to get involved in sports sponsorship – and they certainly have. Every team has a betting partner and some even have betting partners for different markets. But it’s not just bookmakers that have turned to sport for their sponsorship options, the likes of Mansion, 32Red and Genting have sponsored English Premier League teams in recent years while others have turned to boxing, horse racing and many other sports.

32Red did have particular success with their Swansea City sponsorship but have now taken to sponsoring films on Film4. As competition among bookmakers vying for the best placements continues to increase there’s surely going to be more experimentation like this outside of the sporting arena.

One company that has seen brilliant results from television sponsorship is NetPlay, whose brand SuperCasino sponsored Celebrity Big Brother in the UK while recently acquired Vernons Bingo is sponsoring TV programme Loose Women in Scotland. While NetPlay has a background as a company that runs its own SuperCasino and Jackpot247 shows on UK TV their willingness to put Vernons straight onto daytime television shows that a strong TV presence isn’t a prerequisite.

CEO Charles Butler explains that knowing the profile of their customers has been key to identifying TV sponsorship opportunities and that while bingo and daytime TV was perhaps an obvious choice, taking the risk with sponsorship can pay off.

He explains: “Our Big Brother sponsorship could be considered a slight anomaly because if you look at the demographics of Big Brother it’s skewed towards females but if you look at SuperCasino we’re skewed very much towards male customers.”

“At first we wondered whether it would work well but it’s worked incredibly well for us so there’s an element of trying and testing some of these things as the statistics don’t always tell you exactly how it will work.”

On the face of it you might think that looking for TV sponsorship opportunities is simply a case of finding the highest profile show and working out a way of getting involved. However Butler explains that they tend to have a few different ways of identifying the right opportunities. First product managers look for the programming that they think would suit the demographic of their audience before taking it to media agencies or the broadcasters themselves to compare the profile of customer bases.

Staying away from sports

While Butler admits that NetPlay have looked at some smaller sports sponsorship such as the fights of Tyson Fury, they know that they’re best served focusing their attention elsewhere.

“When it comes to sponsorship of football clubs we tend to find that it’s dominated by the betting companies. From our perspective to have a casino brand sponsoring a Premier League football team wouldn’t be an efficient spend of our money,” he says.

“As a whole we tend to find that TV programme sponsorship and advertising is a more efficient use of our money when it comes to advertising casino brands.”

Butler is also keen to point out that the success that the SuperCasino brand has had with its Celebrity Big Brother sponsorship hasn’t been quite as simple as displaying their logo either side of the ad breaks. He explains that the combination of sponsorship and spot advertising plus the programmes themselves have combined to bring about positive results.

He adds: “The nature of TV sponsorship is that you’re not allowed to put a call to action into it so you can just put your branding on there.

“What wedo is also put TV advertising in the same ad break so if someone sees your branding and then your advert in the same break, which often involves some sort of promotion, it reinforces that there’s a strong brand and also that there’s a reason for the customer to go to the website.Overall it’s the combination that provides the major benefit.”

It’s this formula that has been paying off for NetPlay up until now. The nature of SEO means that brand searches are increasingly important and as competition for sports sponsorship opportunities continue to rise it’s an example of how many online operators, regardless of which vertical they’re led by, would be well advised to put their marketing budgets.