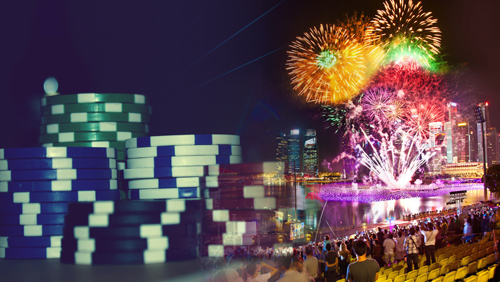 The new year has arrived, and for the poker world it’s likely to be an interesting one. Here’s a look at some of the things I expect to see in the industry during 2014.

Online in the U.S.A.

I don’t think we’re likely to see any major expansion of online poker in 2014. That’s not for a lack of interest – even though they haven’t yet turned anything close to a profit, the three states who got out in front of the rest of the U.S. in 2013 have set off dollar-sign explosions in the eyes revenue-hungry politicos across the country. But it’s an election year, and symbolic business is just about the only kind that gets done when everyone’s job is on the line. If there were strong, across-the-board public support for legalization I’d see things differently, but gambling is still one of those issues that lights a fire under social conservatives, who are bad at lots of things but great at funneling big money to annoy the hell out of people who enjoy having a good time. They can’t hold out forever, but they can push the issue forward for another year. That also means I don’t expect to see any interstate compacts emerge this year, but talks to lay out the framework for one wouldn’t surprise me a bit.

Even in California, where some of the differences between the many stakeholders have been ironed out to the point where compromise looks possible, I still think 2014 is much more likely to see late-game political maneuvering than legislative results. The various tribes have drawn hard lines on the issue and stuck to them for a long time, so one more year isn’t long to wait. There’s a lot of incentive all the various parties to make sure they all get the best possible deal, and as Nevada and New Jersey have shown, it’s not like anybody is going to make a big profit right away anyway. Making that one extra pass is going to lead to the goal here.

As for those states already up and running, I think incremental improvements in their poker offerings are about all we’ll see in 2014, mostly because of the barriers to new vendors entering the marketplace. On the software side of things, the rooms that already have the best products are likely to maintain their edge. But various technical problems, like geolocation snags and banking issues, can only be cleared up via action by third parties. The banking issues in particular are tied up with the state/federal divide on online poker and the uncertain permanence of the DOJ’s new Wire Act interpretation. Just staying up all year long will be a win for the fledgling sites.

The WSOP’s expansion into the Asia-Pacific market last year was a successful one, and the storied series should see modest improvements on those strong beginnings when the second iteration of WSOP APAC gets going this spring. The rules from last year including both it and WSOP Europe in the Player of the Year are also back. Given the costs associated with playing at all three Series locations worldwide – and the smaller field sizes at the locations most difficult for less-bankrolled players to reach – I’m expecting to see another well-known pro win the award this year. If you forced me to throw darts at the board, I’d name Phil Hellmuth, Phil Ivey, and two-time winner Daniel Negreanu as the favorites. I could also see someone like Sam Trickett, Antonio Esfandiari, or Erik Seidel – or anyone who regularly plays High Roller events, really – becoming the 10th player to win the POY award.

What I’m most interested in seeing is how the WSOP’s new online presence in Nevada and New Jersey will affect attendance in Las Vegas this summer. Neither state requires online players to be a resident, meaning anyone is free to visit and try to win a seat to the big show on their laptop. The WSOP Main Event’s rapid growth in the mid-2000s was fueled almost exclusively by widespread online satellites, with their easy access, reduced time commitments, and more affordable buy-ins compared to their live cousins. Had online qualifiers never been taken away by UIGEA, it’s likely the attendance totals from 2006 would be just another point on an upward-trending graph instead of the high-water mark. Obviously the new U.S.-legal product isn’t going to help set any new records anytime soon. But if the Main Event field reverses it slight downward trend from recent years with, say, three to five percent of the total field qualifying online, I would see it as a strong sign for future growth. Even if Main Event attendance were to hold steady with just one to two percent winning its seats online, you’d still be looking at

The Seminole Hard Rock in south Florida was a big winner late last summer with its $10 million guarantee tournament. There were questions before the tournament about the viability of such a large guarantee, which was twice as large as any previous guarantee anywhere in the world, but they were all answered when the tournament drew a field of more than 2,300 players and beat the promised sum by nearly $2,000,000. The SHR is bringing back the big guarantee in August 2014 and there’s no reason the shouldn’t live up to the standard set last year. I also wouldn’t be surprised to see one of the property’s other two big tournament series – the SHR Poker Showdown in the spring and the SHR Rock ’N Roll Poker Open in the winter – make a similar guarantee.

With south Florida showing that big guarantees are viable, I think we’ll see a major player in at least one other market get in on this game – maybe not for $10 million, but perhaps for somewhere between $5M and $8M. I don’t think it’s likely to happen in Vegas but California would be a good candidate, given both the size of its player population and the fact that Matt Savage, who ran the show in Florida, has strong ties there. Flagging Atlantic City could also be a good place for a big guarantee, especially since market-leading Borgata can now offer cheap satellites online, year-round. New Jersey’s nearest competitor, Pennsylvania, might make a good candidate too, but it’s still figuring out its place in the East Coast pecking order. If this trend actually goes anywhere, though, Philadelphia might make a good site for such a tournament in 2015. But that’s another article for another year.