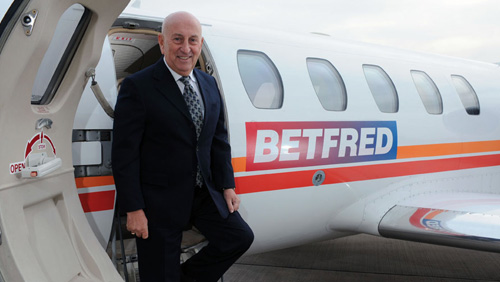 Goal creation and action are two of the most vital component’s that make businessmen successful, and the Betfred owner Fred Done is a successful businessman.

Back in June Done surprised many when, after accidentally acquiring Hollies Truck Stop near Cannock Staffordshire, he realized that he had a multi-million pound business on his hands.

He quickly set himself a goal of opening 50 truck stop facilities along the UK motorways, in the next five years, and has just invested £2.5m in a joint venture that sees Conygar Investment Company PLC also stump up £2.5m, in a £5m truck venture called Road King Holyhead, operating under Done’s Road King brand.

The new truck stop will take over 9 acres of a 14 acre development in Parc Cybi, Holyhead, Anglesey, and will create 200 spaces for worn out truckers, associated amenities for their well-being and 10 logistical support units that will create 50 additional jobs in the community.

The current plans are for the site to be fully operational by the end of 2014.

Done said “This development is a further expansion of the Road King brand following the success of The Hollies Truck Stop. I am pleased to be working with the Conygar team and believe there will be other development opportunities in the future. Once again the emphasis will be on providing top class facilities and excellent customer service to the truckers.”

The business, which is based in the Sharp Project digital hub, in Newton Heath, Manchester, had just 8 staff in Sep 2011 and now employs 35 as it aims to see turnover reach £3m by the end of 2015.

30-year old Andrew Daniels who used to be the Head of Mobile development for Betfred owns the company.

“Manchester is leading innovative development and I truly believe that by nurturing young talent, the city will become the digital capital of Europe.

“I identified Andrew as an amazing talent when he joined Betfred as head of mobile development two years ago. His illustrious attitude and entrepreneurial spirit really stood out. I bought into Degree 53 knowing that it will deliver an outstanding digital design and build service for every customer.” Said Done.