Home / Business / Dealers Choice: Per Sheldon Adelson’s Crotchety Request, I Attack The Message And Not The Messenger 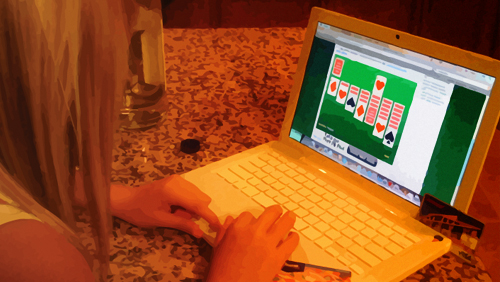 Sheldon Adelson recently wrote an editorial that was published in the Las Vegas Review-Journal. In “Valid reasons to oppose Internet gambling,” he complained that RJ journalist Howard Stutz was “attacking the messenger” by writing a piece critical of Adelson’s anti-online-gambling stance. “(W)hen you see somebody attacking the messenger, it’s usually because they can’t defend the message,” writes Adelson. Let’s do him a favor and go ahead and take a look at that message then.

Sheldon writes: “The truth is I am not alone in my opposition to Internet gambling. While a majority of Americans are in favor of “live” casino gaming, recent surveys show that more than 70 percent disapprove of Internet gambling.”

Adelson demonstrates contempt for his readers’ intelligence by running a bluff on his very first play. Anyone who looks up the research Adelson is citing here will note two things. First, Adelson’s company, Las Vegas Sands Corporation, funded the polls that generated the 70 percent figure. And second, the polls were conducted in four individual states, not nationally; even if the 70 percent figure is accurate, only a charlatan would claim that it applies to a nation of 50 states when the data only comes from four of them.

Pro tip: when you begin your message by talking about the truth but immediately veer off course to mislead your readers, it’s best to make sure there are no glaring holes in your ruse.

Sheldon writes: “(O)ur company has a market capitalization equal to or greater than all of our closest competitors combined…Additionally, our properties in Las Vegas receive twice as much profit from non-gaming sources as we do from our casinos. Our primary markets in Las Vegas also tend to the high-end towards customers who are not likely to play on the Internet. So a financial motive has nothing to do with my feelings about Internet gambling.”

Here Adelson’s message is disingenuous once again. He may not have a participant’s financial stake in online gambling, but it’s ridiculous on the face to say there’s no financial motive here. Las Vegas Sands would benefit greatly if it found some way to prevent its many smaller competitors from entering a market from which it has chosen to abstain

Sheldon writes: “The argument for Internet gambling is enormously flawed and the “coalition” in favor of it includes two gaming companies, a smattering of poker player organizations, and state governments looking for much-needed tax revenue. It’s not exactly what I would call a coalition of the willing.”

The pro-online-gambling coalition might be small, but there’s no coalition of the unwilling here, either. The only people actively opposed to online gambling are the hardcore religious fundamentalists who oppose all gambling and Sheldon Adelson. The fact is that nobody else has a strong opinion – in fact, the single largest opinion segment most recent polling is the 33 percent with no feelings on the subject. For Adelson to implicitly claim their support by attacking the size of his opponents’ camp is terribly misleading.

Sheldon writes: “Proponents say that technology exists to effectively regulate Internet gambling to stop minors, addicted gamblers, money launderers and organized crime from accessing it. But the technology does not exist to block the unscrupulous foreign websites from targeting those same audiences. Apparently, the technology exists to serve the needs of Internet gambling proponents, but doesn’t exist to serve the needs of those of us who oppose it.”

What he fails to realize – or realizes but chooses to selectively ignore – is that the problem of stopping international operators from reaching American customers isn’t a technological problem at all but a legal one. The federal government and the states can bring the full force of the law against American companies that can’t show they aren’t serving problem gamblers, minors, or anything other restricted group, and those companies have no feasible way to avoid such restrictions. If the feds or the states were capable of doing the same thing with international operators we’d be living in a very different world, apparently one where Americans’ internet access is restricted according to the whims of an 80-year-old billionaire casino magnate.

Sheldon writes: “But to undertake an experience in one of our casinos, you need to make a series of physical choices. You have to first get dressed, then leave your home in whatever weather you find. You need to be seen and interact with other people, including staff in the casino, you need to physically buy chips and you need to be seen at a table or in the slot area.”

Here Adelson’s message seems to be that creating obstacles to giving a customer what he wants is a virtue.

Once again Adelson fails to mention an important fact. The only place his assertions about online gambling hurting live casinos have been made is in research his company funded. Just because Sheldon Adelson funded a survey doesn’t necessarily make its findings untrue. But failing to cite anything but your own research doesn’t do anything to strengthen your message, unless your message is “There’s no need to take me seriously when I start citing studies.”

Besides his by-now-tiresome disingenuousness, the number one thing Adelson neglects to account for is the fact that online gambling is an adjunct to the live casino experience, not a replacement. The fact is that, with a few utilitarian exceptions, new technologies simply don’t replace old ones. People still listen to music on vinyl, watch movies in theaters, and order pizzas from their local joint, even though MP3s, Netflix, and frozen pies are readily accessible options. All the amenities that Adelson offers at his many luxury resorts are the kind of thing that can’t be replicated at home. The only people who are going to gamble online all the time in lieu of going to a casino are those who were never going to make a trip in the first place, either because they simply don’t like casinos or because they live too far from one to make it a habit.

Sheldon writes: “We at Las Vegas Sands are fortunate to operate the largest company, by value, in the history of the gaming/hospitality industry. I have had nearly 25 years in this industry and more than six decades in business in general. So I have the experience and the knowledge to assess a potential opportunity and to determine whether it’s good or bad for my company or the industry overall.”

Translation: I’m the big bully on the block, and I’m older than you, so I should get to call the shots. Also, my pre-Information Age business acumen is an acceptable alternative to a firm grasp of new technologies.

In 981 words, Adelson attempts to deceive his readers far more often than he actually lays out the legitimate reasons to oppose online gambling promised by his article’s headline. Anyone looking for the real reason we have to suffer through his lecturing would do best to turn to an interview with Bloomberg TV from this past summer. “I have 2 teenage boys,” he told the interviewer. “They get addicted to everything that is on the TV.” He can’t control his own children’s impulses, so he wants to control how other people entertain themselves instead. No wonder he misleads and deceives with such abandon- treating the general public like teenagers isn’t a message that will ever sell.