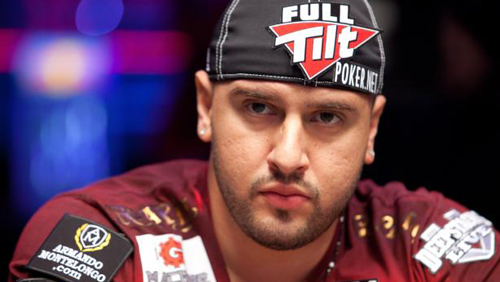 Michael ‘The Grinder’ Mizrachi has confirmed that he has parted ways with the controversial online poker site Lock Poker, in a recent interview with BLUFF at the World Series of Poker Europe (WSOPE) event in Paris.

There is a slight chance that Sebastian Vettel might finally have more advertising patches than Michael ‘The Grinder’ Mizrachi, after the poker news broke of the dissolution of his relationship with the fumbling, bumbling poker site Lock Poker.

The first inkling that the Grinder was dropping ties with the hated poker site, was when his face was taken down from rogues gallery on the landing page of the Lock Poker website. Then BLUFF managed to sneak a camera into his face during a break at the WSOPE where he was quoted as saying, “Yes it has {ended} and we’ll send out a statement soon.”

The Grinder was referring to his management company Title3 Management Group who have been instrumental in getting Mizrachi more patches than the world’s most eager boy scout.

The Grinder signed for Lock Poker at the turn of the year, promoting Jennifer Larson CEO/Owner of Lock Poker to state: “Michael is a pioneer of this industry. He is the perfect combination of dedication, passion, insight, perseverance and unbelievable skill.”

“Players like Michael are the back bone of this industry and what makes it great. We will integrate him into all aspects of the company. We continue to bring in these exceptional people to enable us to innovate and change the world of online poker. We intend on being the first choice for players around the world. LockPRO will be at the helm of that!”

Larson’s lofty goal of being the first choice for players is a bit of a long shot now, but having said that, there are still 25 sponsored pros with their names affixed onto the landing page of the Lock Poker site. Amongst them are Bryan Pellegrino and Annette Obrestad, and they have both come under fire in the Lock Poker thread on 2+2 since the Grinder story broke.

2+2 poster ChoakMyDee stated, “It’s too late for Mizrachi too redeem himself,” before continuing, “Let’s not forget about the evil unit named Annette Obrestad. She ignored tweets when we tried to let her know she reps a scam site. She obviously doesn’t care about the poker community and we should make sure she never gets sponsored again.”

This prompted an angry response from Pellegrino (posting under the alias PrimordialAA), who not only defended Obrestad’s lack of Lock Poker activity on the social media forums, but also his own reasoning’s for staying on the site as a Lock Pro. You can read his exact comments here.

It seems the anger vented by some 2+2 posters comes after ESPN coverage of this years WSOP allegedly showed both Pellegrino and Obrestad wearing Lock Poker patches during airtime.