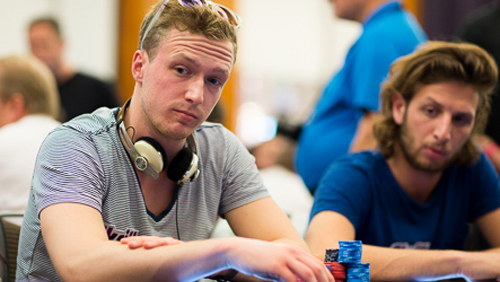 European Poker Tour (EPT) London continues to lose its shine as its final figure of 604 players makes it the lowest London attendance since 2008; and the third consecutive year that numbers have dwindled.

The number crunchers at PokerStars have their work cut out as this mornings poker news headlines will be showing more signs that the £5,250 price tag is getting less and less attractive for the London poker community.

604 players is a good number, but when you are PokerStars you expect more. It’s the worst EPT London number since Joseph Mouawad took the title back in 2008, and it pales into insignificance when compared to the 1,234 players that entered EPT Barcelona last month.

Is it the weather? Is it hotel prices? Is it the annoying cockney accent? One person who couldn’t care less is Maximilian Senft. The young Austrian ended the day as the chip leader after coming out of the traps on jet powered roller skates; Senft somewhat dubiously calling a six bet by Yann Dion with ace-king, and he got maximum value from the Canadians pocket aces on a board of [Kc] [Ks] [8s] [Qs] [8d] to give him the early chip lead. Dion would be eliminated not long after, as would Sam Cohen who ran her flush into a higher flush to end up…well…flushed.

Michael ‘The Grinder’ Mizrachi flopped a set of nines against James Dempsey’s pocket kings to double up. Dempsey would struggle on until the fifth level of play before being eliminated and Mizrachi would cruise through the day ending on 68,000 chips.

A Broken Finger and a Resurrected Timex

Mike ‘Timex’ McDonald used the fourth level of play to complete an amazing comeback after finding himself short. He effectively tripled up when he found pocket aces in a three way squabble that finally ended with him going to showdown with former WPT Grand Prix de Paris winner Christian Grundtvig, and ace-queen. Timex would use that momentum to finish the day with 42,900 chips.

Former WPT winner Sean Jazayeri would exit the competition, as would Nacho Barbero, before we lost the £50k Super High Roller winner Martin Finger. The German making a move holding a pair and a draw against the nut straight of Daniel Weinman.

Kevin MacPhee and Tom Middleton both have what it takes to win an EPT title, but as the Highlander so often used to say, ‘there can be only one.’ For the time being that ‘one’ is Tom Middleton as the pair got it in on [Kd] [8h] [7h] with MacPhee on the draw with [Qh] [Jh] and Middy in the lead with bottom two pair. The turn and river bricked for MacPhee and he was out. Middleton would finish the day with 40k.

The EPT Player of the Year Leader Finds The Door

When this event started it was David Benefield who held the lead in the EPT Player of the Year (POY) race. He may still have it when it ends as well, but one thig we know for sure is he won’t be adding to that point tally.

Randall Flowers was another young man shown the door, and it was Dominik Nitsche who caused most of the damage with a KK v AK clash that went the way of the German.

Chris Moneymaker lost a flip, and his place in the competition, when his ace-king couldn’t find the help it needed to beat his opponents pocket jacks, and Kent Lundmark was also eliminated after running pocket kings into the ace-queen of his opponent when the board brought two more ladies out of the deck.

David Williams lost his way in the penultimate level AK v KK; UKIPT London winner and third place finisher Robbie Bull and Jack Salter were both eliminated, the $10m man Chris Moorman was out, as was ElkY and Dominik Nitsche lost all of those Randall Flowers chips to also be eliminated from the contest.

The Final Level of the Day

The final level of the day was the setting for one of the more unusual types of hands you will see in top flight poker.

Barry Shulman opened the action with a 1.5k raise, Anton Wigg made the call before a third player in the hand three bet to 5.2k. Shulman made the call, Wigg back-raised to 12.4k, the original three-bettor folded and Shulman flatted with very little behind.

The flop would rain down [6c] [5s] [2s], Shulman checked, Wigg set him in and Shulman called. It was [Ac] [Kc] for Wigg and he must have been gobsmacked to see Shulman holding the nuts with [4c] [3c]. Wigg was in desperate trouble until the [Tc] on the turn, and [7c] on the river handed Wigg and unlikely victory and sending Shulman out of the tournament.

The biggest star to exit in the final level was the recent UKIPT High Roller winner Vanessa Selbst, who met her fate chasing a flush against Jason Tompkins who was holding top pair.

Do you remember a one trick pony by the name of Phil Hellmuth?

It’s unusual to see the ‘Poker Brat’ in an EPT field as he has chosen to stay close to his family throughout the preceding years, but as his children have now flown the nest, Hellmuth can also spread his wings and bring his bravado and bluster to the British isles.

Hellmuth duly enters the first EPT tournament in God knows when and promptly wins it. The £2,000 Open Face Chinese title and £15,800 in prize money now resides in the hotel room of one of the greatest names in poker.

Hellmuth also made it through to Day Two of the EPT Main Event, but has his work cut out with only 2,600 chips.

For a recap of the Day 1A action just click here.