Home / Business / Is The Sports Betting Revolution Upon Us? 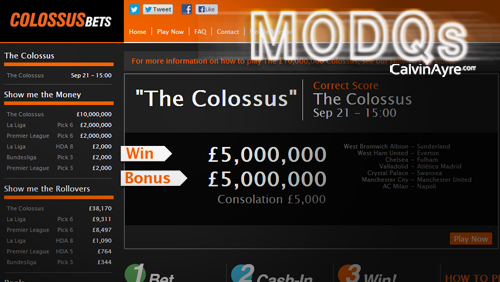 We’ve become a bit desensitised to the word innovation. You’ll be hard pushed to find a company in the iGaming industry that hasn’t used it at some stage in a company description or some form of marketing materials.

Of course there have been many new products over the years. Live dealer casino games, mobile products and in-play betting have all come along and for the most part been successful. But these products were more adaptations than disrupters. The fact that they became so common across the industry so quickly shows that there wasn’t really anything too outlandish being created.

It’s because of this that for a genuinely innovative company to come along and succeed they have to do more than just tell us how innovative their product is, they have to prove it.

The latest company of this type is Colossus Bets whose product of the same name has launched just last month. There have been some bold statements being made by those involved in the company. Back in July, Betting Business headed an editorial from CEO Bernard Marantelli with a strapline saying: “He believes the firm’s new bet could compete with the Euromillions lottery”.

Mark Davies, one of the first men in at Betfair more than a decade ago, revealed on his blog that he believes it to be the “first real innovation we’ve seen in the gambling space in a long while”. An endorsement of this kind from a man who was part of the original management team at probably the most disruptive online gambling company to date speaks volumes. Admittedly Davies does have a vested interest in the company but he wouldn’t have got involved if he didn’t believe at least some part of this statement.

With this much confidence in the new product radiating from the respected people behind it, perhaps we could actually be onto something genuinely new. So, are we in for another Betfair or another innovative other?

Colossus Bets’ main hook for most customers will be pretty obvious with the term ‘Football’s Biggest Bet’ being bandied around. Huge prize pools are on offer with The Colossus Bet taking centre stage with £10,000,000. The idea behind it is that you predict the scores of seven matches that have been chosen – if you do so correctly then you win a share of the main prize pool. If you get the correct outcomes but not the exact scores then you are still able to win through the consolation prize.

This is a clear attempt to revive the pool betting system that was so popular in the UK for so long. But with Sportech admitting that their customer based is either dying or dead, it makes you wonder why they haven’t adopted a similar approach. The strength of their brand coupled with a good platform could have been a winning combination. As a result of the lack of effort made by Sportech so far to take Littlewoods Pools online, Colossus Bets have found themselves a new genre of online betting product.

But a much more interesting way in which Colossus differentiates itself from others is with the cash out feature. This engaging option begins once the first of the games that you’ve predicted have begun and allows you to cash in on a percentage or all of your ticket if you’re still on course for success.

The huge numbers used to draw people in are clearly a main selling point. However, they come with their own issues with the cynical nature of people coupled with a few early poor performances meaning that interest could be lost very quickly. The ‘you’re more likely to be hit by lightning twice’ type-phrases that are often spread around apply here. Having said that, plenty of lotteries continue to be popular despite these opinions.

What might not help is that the game isn’t necessarily easy to understand. Even having watched the introductory video, factors such as betting on multiple outcomes for the same game and how much a bet costs still remain unclear.

Then there’s what should be the highlight of the product – the cash out feature. The problem with this is whether it’s necessary for the type of bettors attracted to the game. Accumulator bettors tend to be looking for the large payout and offering them smaller gains while demanding their constant attention may be a step too far. It’s certainly a feature worth further use but it may well prove more likely to catch on in binary options, FOREX or in betting where the eventual payouts aren’t quite a large.

Another issue is the target market. The product appears to be best suited to a type of bettor that doesn’t currently exist. Speculative but also advantage players – two categories that have traditional been at opposite ends of the spectrum. Points similar to this were picked up on in the comments made on Mark Davies’ blog, although these comments came across as more of an attack than feedback.

So while the entire product isn’t perfect, it is something new and is deserving of its innovative label. Plus you can’t ignore the fact that it had 15,000 bets in its first week of operation, a starting point that plenty of new product operators would be more than happy with. The use of pool betting is something that isn’t new but hasn’t been done very well for a long time however it’s the cash out feature that’s the standout when it comes to innovation and its here where Colossus Bets could really be onto something.