In this article, we provide an explanation for this phenomenon – luck and player psychology – and argue that online poker operators should pay personalized attention to new players who’ve experienced a bad beat or impossible situation.

This Graph is a Problem for the Online Poker Industry Gary Loveman shouldn’t have a problem with the left side of this scatter – players that initially lose money play less.  This result is supported by both economic rationale (you need money to keep playing) and psychological intuition (“losing isn’t fun” can easily become “poker isn’t fun”).  Further, its shape is sensible – the more money you lose, the faster you stop playing, and/or the less fun you’re having.

But the right side of the scatter shows a group of players that, although lasting longer than their unprofitable counterparts, don’t last nearly as long as players who had more mundane first experiences.  Why do both wings of this scatter show the same behavior? Having established one commonality between the players in the wings of the scatter, we still have a key question: why would initially lucky players have shorter lifetimes? 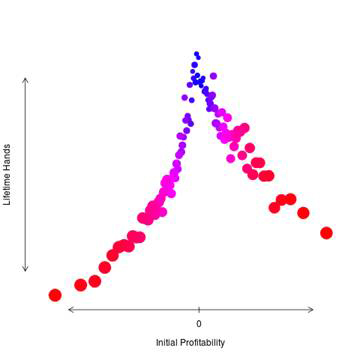 Borrowing from Kim Lund, most new players come equipped with the “it could be me” story.  But because of the well-documented skill gap, this particular story is almost guaranteed to fall flat.  Players who are unlucky from the beginning have their bubbles burst early; players who are initially lucky, a bit later.  But both types of players share the same fate:  a poker journey that doesn’t – and for almost all players, can’t – live up to expectations.

How to head off those unfulfilling experiences?  The most obvious answer is a reprogramming strategy:  post-acquisition, pay close attention to the bad beats and impossible situations that new players experience, and customize messages that help them build realistic expectations.  And start the process early.

This reprogramming doesn’t need to take the form of a fully-immersive educational experience.  (Although we have a co-founder of the FTP Academy on staff, so trust us, it’s crossed our minds.)  We’re suggesting something more general, and it could be as basic as the occasional in-game message or end-of-session email: console unlucky players, remind lucky players to stay focused, give a pat on the back when players do something well, and overall, help players understand that poker is a journey. Dave Thornton is the founder of Skill in Games (SiG), a data vendor to the online poker industry.  SiG takes an administrative hand history, and breaks each player’s outcome into action-by-action skill measurements, and two varieties of street-by-street luck measurements. If you wish to submit your own editorial pleasecontact Bill Beatty.