Home / Business / Becky’s Affiliated: A Day in the Life of an iGaming Affiliate Manager Part 2: The Conference 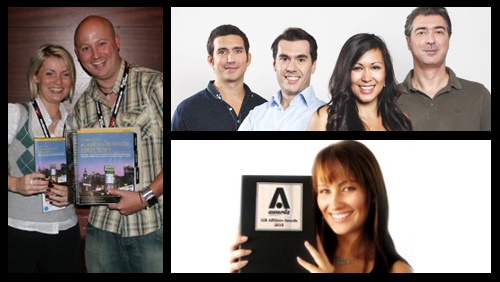 The online gambling industry’s best affiliate managers are masters in dealing with affiliates remotely while in the office and in person at the online gambling affiliate conferences.  In part one of “A Day in the Life of an Affiliate Manager” we reviewed what the office life is like for Martyn Beacon of Affiliate Edge, Rick Abdullovitch of Betting Partners, Renee Mate of Rewards Affiliates and Marit von Stedingk of Affiliate REPUBLIK and now we’ll take a look at their typical day at an affiliate conference.

There are three dedicated online gambling affiliates conferences per year in difference cities around Europe, all expertly arranged by iGaming Business.  Traditionally the affiliate shows have a heavy emphasis on the evening networking and while this sounds like one big piss-up, it becomes a finely tuned skill to be able to survive daily expo life and nightly nightlife three to four days in a row.

When it comes to managing a day at the show, there’s no right or wrong way to go about it, so long as you get the job done.  Martyn is a firm believer in the “no meetings before noon rule”. He explained, “An old boss of mine wisely got me into his ethos, never make a meeting before Noon! This isn’t just so you get a lay in but because not many people get to the show before that time.  It’s worked great for me over the years and something which I stand by, I have had breakfast meeting requests but they have been politely turned down as I function best later in the day”.

Marit wakes up bright and early, goes on a caffeine mission and heads down to the conference.  When asked how her day begins she answered with, “I like to get to the conference the moment it opens to ensure that I make the most of it. I want to meet as many people as I can, whenever they happen to be there. So the real answer is that with the long parties the night before it usually starts… painfully. And with coffee… lots and lots and lots of coffee”.

Renee has abandoned the bottle (but not the parties) at the conferences, so two hours sleep minus the hangover plus breakfast is her formula for success before hitting the conference floor.

A lack of sleep is fairly common at these events so sometimes extreme measures must be taken to ensure meetings aren’t missed.  Here’s how Rick manages his AM.  “I wake up to my iPhone alarm that has been strategically set to go off at 3 different times to ensure that I wake up after having rolled into bed 2 hours prior from the previous nights shenanigans. Then its the mandatory 9am breakfast, where regardless of how hungover or still drunk you are, you still show up and meet with the team”.

The expo floor usually opens between 9 and 10am and closes at 6, so that’s a good eight or nine hours for affiliate managers to do their thing.  Obviously the main objective of these affiliate conferences are to meet with affiliates and each affiliate manager has their own approach.

Rick has a combination of goals at the conferences.  “Most of the time I have meetings setup in advance with partners, I also enjoy walking the floor looking for the infamous ‘yellow bracelets’ trying to meet new affiliates, but it’s also a great time to visit competitor booths and get insight into what they have coming down the pipelines and how to keep up with the movers and shakers in our industry”.

Martyn is also a meeting planner, although he mixes up his day with other tasks as well.  “We don’t do the booth thing so I set up and plan meetings throughout the three days I’m at the conference or the hotel. I try and work in space for cruising around the conference floor looking for random affiliate meetings and picking up any goodies that my competitor friends might be giving away”.  Martyn also makes it clear that his meetings are less of a “hard sell” and usually used as an opportunity to simply to “put a face to the emails”.

With less of a focus on pre-arranged meetings, Marit likes to smile and talk with anyone who is willing to spend time with her and Renee sets out to meet new affiliates to work with her brands and to increase the awareness of her brands in general.

The evening’s activities usually kick off straight from the conference floor, often picking up in the hotel lobby as soon as the expo closes.  Wining and dining is next on the list followed by the networking party and the fun often times does not end there…let’s see what a typical evening consists of for our Affiliate Managers:

Marit:  “I love the parties as people tend to be more open and friendly, but often times you’ll find me outside talking to people or at Affiliate REPUBLIKs VIP table catching up with old and new friends”.

Martyn: “It’s more of a nice meal with affiliates before skipping the sponsor party and heading back to the hotel. I tend to do a fair bit of networking around the hotel lobby which seems to work for me thus far”.

Renee: “Eating, laughing, talking and dancing. The latter 2 are at the networking event usually”.

Rick: “Having business dinners with partners, hitting up the official conference party, swear to myself I’m never going back to a conference party and then hitting the towns hottest spots with colleagues and business partners where the male to female ratio is not 100:1”.

For the true iGaming affiliate industry diehards, leaving the conference is a bittersweet time, bitter because these events give us a high, we like people, we like entertaining people, these are our friends we only see three times a year…and sweet because if we don’t get some rest NOW we might DIE.

When Martyn returns after a conference his first priority is to spend time with the family, shower his kids with conference freebies and then he hits the computer.  “When I return back to the office, I tend to catch up on any emails/Skype’s I’ve had while I’ve been off before making the follow up calls/emails to the people that I met at the conference. I generally give a few days before making the follow up emails as I know these people get a lot of emails and I find the response rate is better about a week after the event itself”.

Once Rick has ridded his body of residual Red Bull, he also begins the fun-filled follow up process.  “You head home and follow up with the existing and new contacts you’ve met at the show, start working with the new affiliate who nobody has heard of but has promised you he can send you thousands of new depositors a month and start tallying your expense receipts wondering how you’re going to justify that bottle service bill to your boss ;)”

Renee, who is based in Australia, inevitably has one of the longest journeys home but she makes the most of that plane ride. “I get a little depressed saying goodbyes to my industry friends. It’s hard to see people and have such an intense friendship for so few days every 6 months or so. I then sleep for 24 hours on the plane on the way home, get in at 6am and go straight to the office to work the whole day…no jetlag and straight back into it the next day”.

When asked what happens when it’s all over, Marit spoke for many of us when she said, “Is it ever really over? Its back to work, talking to the people you meet and preparing for the next one…”