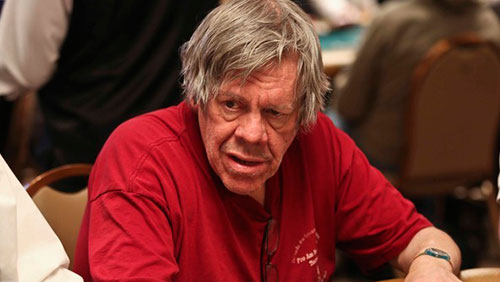 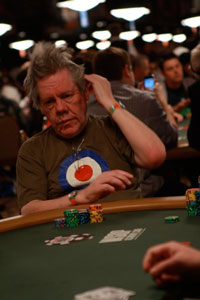 The Dog Killer was seated between the Tommy Lee Jones fat look-a-like and the Nick Nolte Mugshot. The Nick Nolte Mugshot was seated to the right of Spike from the Welsh Valleys, and then came The Pro and finally I was tucked in beside the dealer in the nine seat. In the one seat sat No-Neck who had a very annoying habit of explaining every single decision he made in every hand I played against him.

“Don’t ever mess with a man with no neck.” Said the Tommy Lee Jones fat look-a-like.

I decided the best way to not mess with him was to ignore him. I don’t thing he was too enamored by my lack of conversation. Next to No-Neck was the Nit and then came The Rock, another member of the Welsh Valleys who had traveled over to the World Series of Poker (WSOP) to do anything but play in the WSOP.

I couldn’t keep my eyes off the Nick Nolte Mugshot. I honestly think if Rihanna was seated next to him, catching her hole cards in her butt-crack, I still wouldn’t have taken my eyes off him. He was dressed in the type of Hawaiian shirt you expect to see tourists wearing, except his sane mannerisms revealed a man who had spent significant time on the poker tables. He had identical watches on both wrists and two pairs of spectacles hanging from the second button on that wonderful shirt. He had a set of pegs that wouldn’t look out of place inside the mouth of a witch. Blackened and decaying to the extreme. Each time he was put to a decision, his tongue would flicker feverishly between the identical gaps on either side of his front incisors. It was disgusting and addictive in the same sense. He was a happy man and his face resembled that of a cliff having been battered by the seas for a millennia. On top of the ragged cliff sat a stream of grey hair – the type that would scream if it ever saw a comb.

The Mugshot was clearly mentoring The Pro, who got her name after she told the table that she had moved to Las Vegas to be a professional poker player. She must have been 40-years of age. The type of woman who has never had sex in her life. Quiet, unassuming and nothing like a pro of anything. She was dressed entirely in khaki and was wearing a set of spectacles that wouldn’t look out of place on the face of John Christie the murderer from 10 Rillington Place. Come to think of it she could have easily have passed as a serial killer in a Quentin Tarantino movie.

At one point I was sure that The Mugshot and The Pro were taking their teacher/student relationship a step too far. Each time she was put to the test I was sure he was signaling to her with his tongue. It was bizarre as he would look at her and flick his tongue in and out of his mouth like a snake. He was either signaling to her or trying to turn her on; but neither notion had any success, as she never won a pot, and I have the feeling she was as arid as a desert.

All the pots were going to the Welsh. The lads from the valleys had been drinking vodka and red bull for 23-straight hours.

“There’s a fly in my vodka red bull.” Said The Rock.

He was just staring at his drink, completely unaware that there was a game of poker going on around him.

“There’s a fly in my vodka red bull.” He said for the second time.

“You do realize that the drink is free…just get a vodka without a fly in it.” I said.

“But there’s a fly in my vodka red bull?”

“Did you know that the reason there is a Dragon on the Welsh flag is because the Welsh Dragon killed the English Dragon when they had a battle.” Said The Dog Killer.

The Dog Killer had earned his name after telling the table that his father had once shot a Labrador pup. He was only joking, of course, but the people around the table had not seen the funny side of it. Player’s left in droves and the current crops of oddities took up their spaces.

That was No-Neck. A huge young kid who would just scream DOG KILLER at the top of his voice each time Dog Killer said anything.

“The Welsh Dragon killed the English Dragon?” The Tommy Lee Jones fat look-a-like mentioned under his breath before shouting out a series of nonsensical references that made everyone laugh. He did this every orbit or so and it had everyone in hysterics. I couldn’t tell if he was blind drunk, was serious or just taking the piss. He would also cough a lot…and I mean a lot. I was sure he was going to die and The Dog Killer kept telling him to stop spitting on his guns.

“I didn’t know Dragons were indigenous to the UK. I thought they were from Asia.” Said The Pro.

“But Asia isn’t that far away from the UK.” Said The Nit.

“It’s a million miles away from Asia,” said Spike.

“But it’s next to New Zealand and that’s just south of Asia.” Said The Nit.

“The UK is a million miles away from New Zealand.” Said The Dog Killer.

“Do you think we are from Australia?” I asked the Nit.

“Yeah…isn’t that in the UK?” Replied the Nit.

Americans and there sense of geography. Suddenly, you realize what excessive smoking of pot does to your brain cells. Back to the poker and everyone had limped into the pot (except The Nit) and the action fell to The Mugshot in the big blind.

“I’m going to make it a triple quack-quack,” said The Mugshot before putting a bet of $66 across the line.

Each time The Mugshot made a bet he would make it in increments of $22. He called the $22 bet the ‘quack-quack’, the $44 the ‘double quack-quack’ and the $66 the ‘triple quack-quack’. I was half expecting a couple of suits to walk into Planet Hollywood with a stun gun ready to drag him back to the Las Vegas Sanatorium – him and The Pro who thought Dragons were real and lived in Asia.

Everyone folded and the dealer looked at me as I stared impassively at The Mugshot as he proudly collected his limping money and headed off in the direction of the toilets.

“Do you know who that is?” The dealer asked me?

“It looks like Nick Nolte on GHB.” I said.

“That’s Paul Magriel, the most famous Backgammon player on the planet.” Said the Dealer.

Paul Magriel? I knew that name. Then I remembered that during an interview with Erik Seidel – in Cannes at the WSOPE – he told me that Paul Magriel was his Backgammon mentor when he first got into the game during his early days in New York.

I Googled his name and realized not only was The Mugshot THE foremost expert on anything related to Backgammon, but he was also the person who invented the M-ratio, and yet here he was poking his tongue out of his mouth and screaming quack-quack whilst betting $66 into $19 pots!

“Hey, Rock, that looney tune is Paul Magriel. The guy who invented the M-ratio.” I said.

The Rock looked up at me and said, “But there’s a fly in my vodka red bull.”

“Whose turn is it?” Said Dog Killer.

Welcome to the lives of the riff-raff that have been attracted to the WSOP for the past 44-years.