Casinos employees in Foxwoods fight for their right to choose comfort over sexy, as the union takes up the battle over the decision to force employees to wear high heels.

I feel like such a hypocrite when I am sat at the tables in places like Las Vegas. I divide my time between ogling the cards at the tables and ogling the waitresses in their skimpy outfits and high heels. Some of the outfits are outrageous with busts ready to flick buttons into my eye, skirts so short if they bent over I could see what they ate for breakfast and heels…those heels. Man I love those heels. 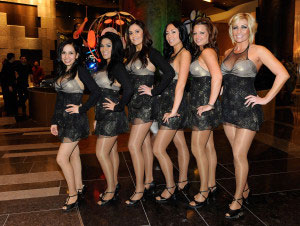 But despite the very selfish enjoyment that I derive from my voyeurism I also feel for the ladies as well. The large majority of them look like mutton dressed as lamb and the heels are a killer. Not that I’ve ever tried them…wink…wink…nudge…nudge.

Heels may turn the fella on and make mediocre legs look like a cracking set of pins, but they wreak havoc on a woman’s body. Constant use of high heels can cause sciatica, damaged Achilles tendon, bunions, hammertoes and corns. Christ…it’s no wonder men prefer that women keep their heels on in the bedroom.

So it’s good to see that Casino cocktail waitresses are fighting back courtesy of a dispute between Local 371 of the United Food and Commercial Workers Union (UFCW) and the Foxwoods Resort Casino in Connecticut.

“Most of us girls have been here for 20-years. This job has really done a number on our feet and they know it,” said cocktail waitress, Cheryl Haase.

Haase, and her union, are fighting for the right to wear footwear of an individual choosing and so far the negotiations are running back and fore. The casino did relax their original stipulation that cocktail waitresses must wear 2-inch heels, but instead insists that they wear shiny black shoes instead. There is a caveat that waitresses could relax the law further with a doctor’s sick note covering a year, but then after it expires they would have to resign or take up another position within the casino – should one be available.

This is not the first time that the ladies have fought back against the casinos when it comes to the stiletto wars. Atlantic City in the 1990s was the site of another flare up after waitresses at the Borgata Hotel Casino & Spa successfully sued their employers after being forced to wear high heels and low cut tops designed to show off their baby feeding gear.

Discussions between the UFCW and the casino are set to continue in September.