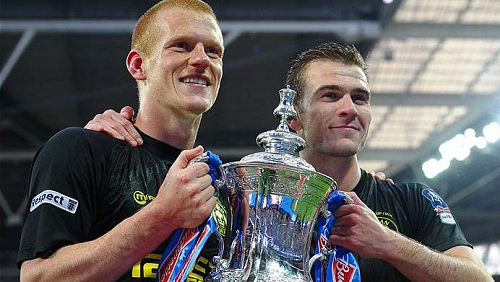 Ben Watson comes off the bench to sink 10-man Manchester City with an 87th minute header that handed Wigan Athletic the FA Cup final in their first ever appearance in the oldest cup competition in the world.

Not since Lawrie Sanchez headed the Crazy Gang into F.A Cup folklore back in 1988 has the story of the underdog been so beautifully played out. Before the match started the bookmakers didn’t give Wigan a chance as they made them 9 to 1 shots to take the famous trophy back to the pier for the first time in their history. But as the clock struck 87-minutes Big Ben struck as Ben Watson came off the bench to score a golden goal to send the 30,000 Wigan fans into a state of rapture.

From the very first moment the ball arrived at the feet of Callum McManaman you could sense an upset was on the cards. The young Scouse winger made Gael Clichy look like a Sunday league left back as he waltzed passed him whenever he wanted. The magical performance from the man of the match seemed to fire belief into the belly of Wigan, and with McManaman raiding the right flank and the excellent Roger Espinoza causing all sorts of problems down the left, the 9 to 1 odds offered by the bookies started to look like wonderful value.

But despite the excellent start from Wigan you always wondered if they had the quality to find the final touch. The Man City players certainly chose the wrong day to have a bad day, but despite their poor performance they always looked like they had that extra bit of zest needed when it came to the final third of the field. When blue moon attacked there was five or six players skirting around the box looking for the key to pick the lock of the door that was being so well guarded by the Wigan keeper Joel Robles, whilst at the other end of the field, for all Wigan’s excellent play, there were only ever two or three players in each attack.

If Wigan were going to find a route to goal you felt that it was going to be a set piece. It was a game where there were a few shouts for a penalty, most notably when McManaman and Espinoza both bit the dust in each half. But Andre Marriner’s whistle never really breathed any life until the 85th minute when the City full back Pablo Zabaleta was sent off for sending McManaman flying after another dangerous run for the future England prospect. The sending off – only the second red card in a Wembley FA Cup Final in the history of the oldest club tournament in the world, after Kevin Moran was dismissed playing for Man Utd v Everton in the 1985 final – gave Wigan more hope and with just minutes left to play Watson rose majestically at the front post, to flick a header passed Joe Hart in an almost carbon copy of the Lawrie Sanchez goal that defied all the odds 25-years ago.

“At half time we were all down because I thought we had played very well and in a FA Cup final you know you need to take your chances. I was worried we might have wasted ours. Yet this group of players always keep fighting and believing. I am the manager to win this FA Cup but more importantly I am so proud to be the manager of these players, these winners. I was thinking about extra time – and then we score. I didn’t see that goal coming.” A jubilant Roberto Martinez told reporters on the pitch as the Wigan players celebrated.

It was a fabulously well-timed moment for a coach who may well be on his way to Goodison Park to replace the departing David Moyes in the summer. One man who will sorely miss him will be the Wigan Chairman Dave Whelan. A man who, finally, has a different FA Cup memory to keep him company when he closes his eyes at night. It was 53-years ago that a young Whelan broke his leg playing for the losing side Blackburn Rovers in the FA Cup final against Wolverhampton Wanderers. It was an injury that would finally force Whelan to retire from the game at just 28-years of age. A terrible memory that will now pushed into the darkness with the arrival of this amazing triumph.

Martinez said that the celebration would be an ‘Iron Bru’ celebration as alcohol was off the menu. Wigan still lie in the bottom three of the Premier League with just two games remaining and their fate in the hands of the other teams. They are four-points behind Sunderland and five points behind the trio of Southampton, Fulham and Aston Villa with a game in hand. Ironically, they host Villa in the final day of the season in a match that could still be their second cup final.

“If we survive it will be like winning the Premier League.” Said Martinez.

Can Wigan achieve the double? You wouldn’t put it past them.