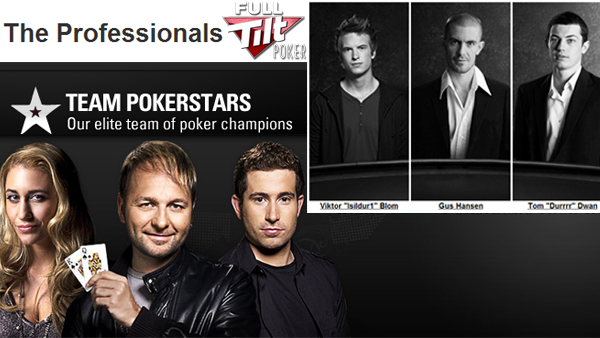 The gladiators have been chosen, their weapons are currently being sharpened and the arena where green blood will be spilt is the European Poker Tour (EPT) event in London. It’s Daniel Negreanu versus Gus Hansen, 6th in the all time money list versus 13th, Canada versus Denmark, ego versus ego but more importantly it’s PokerStars versus Full Tilt.

So why am I not getting that excited?

There was a time when all was rosy in the garden of poker. Everyone had fun and the apple was left alone to dangle untinged from the tree. In those heady days PokerStars and Full Tilt Poker ruled the roost. Two cocks permanently trying to ruffle each other’s feathers; innovation after innovation driving the value for the paying customer. It was Dynasty versus Dallas, Mike Tyson versus Evander Holyfield. High heels were being thrown, and ears were being chewed off. I would have been first in line to watch this type of fight…back then that was.

What started out as an interesting needle on Twitter has seemingly turned into a pre-conceived marketing ploy to pull more eyeballs into the world of Full Tilt Poker.

It all started with a tweet that Gus Hansen sent to Daniel Negreanu. It contained a YouTube clip of a much talked about hand between the pair on the TV series High Stakes Poker, where Hansen dragged in a $600,000 pot after making quad fives with Negreanu holding sixes-full.

“Wonder if I ever get another chance to take your money.” Tweeted Hansen.

Hey @realkidpoker remember this hand youtube.com/watch?v=_ufZ-D… – Wonder if I ever get another chance to take your money 😉

“I was going to congratulate you on your graph for 2013 but then realized that I was looking at it upside down. Ouch!” Replied Negreanu.

[email protected]gushansen I was going to congratulate you on your graph for 2013 but then realized I was looking at it upside down. Ouch! — Daniel Negreanu (@RealKidPoker) February 21, 2013

Various insults were thrown back and fore and the poker world started to get interested. Between the pair they have 300,000 Twitter followers. When they light a verbal fire people put their marshmallows on a stick and get comfortable. There was a war brewing and everyone could smell the cordite.

Hansen invited Negreanu to play him heads-up, online, at Full Tilt Poker and Negreanu went one better by challenging Hansen to a Battleship style Team Challenge at EPT London. It would be Team Negreanu versus Team Hansen, or Team Negreanu versus the ‘Elder Statesmen and the two cronies,’ as Negreanu quoted during his YouTube video challenge.

Hansen went away to pick his team of three from his choice of…erm…three! And Negreanu started to poll his 227k twitter followers to see which members of the elite PokerStars Team Pros should face off against the two cronies: Viktor Blom and Tom Dwan.

“It will be good for poker because it will create a lot of fun railing opportunities for a lot of people,” said Negreanu.

Negreanu then releases another YouTube clip where he reveals that Isaac Haxton and Bertrand ‘ElkY’ Grospellier will make up the formidable Team PokerStars to take on ‘The Professionals’ of Full Tilt Poker.
Out of respect Negreanu declares that the heads up online matches will take place on Full Tilt Poker and this is where the plot emerges from the shadows. On an average week PokerStars can expect to be seeing 25k users per day compared to the 4k that are currently swimming in the cooler waters of Full Tilt Poker. The site needs more people and what better way to attract them than to instigate a happening. A clash of two of the more interesting poker personalities on the planet. Why not start a fight between Daniel Negreanu and Gus Hansen?
When Full Tilt Poker looked into the eyes of the serpent and decided to eat the fruit from the tree, they forever changed the landscape of poker. They ruined this sort of a spectacle for me. Instead of getting excited about a clash of titans from two warring companies, we have a pre-arranged knitting competition that bears all of the hallmarks of a Wrestlemania Main Event.

So it’s Team Negreanu v Team Hansen, Rational Group v Rational Group, ElkY & Haxton v Dwan & Blom…but does anyone really care? Someone tell Jean Paul Pasqualini, Cedric Rossi and Ali Tekintamgac to call Negreanu some names and maybe we could get a Team PokerStars versus Team Tarnished up and running.

Now that’s what I call a fight worth watching.