It’s finally happened. Hell has frozen over…and all being well Ladbrokes will soon be completing the acquisition of an online gambling company.

On January 24, 2013 Betdaq posted a notice on the homepage of its main consumer site that it had agreed a deal with Ladbrokes PLC. The i’s and t’s are due to be dotted and crossed by the end of this month leaving Richard Glynn with his digital expansion.

Ladbrokes’ previous takeover attempts of 888 and Sportingbet, combined with this Betdaq deal provides an insight into Ladbrokes’ mentality towards the expansion of their digital business – anything would do.  While the three iGaming operators in question are similar in that they’re pureplay companies, there are few similarities after that.

The difference in flagship products is most obvious. Sportingbet take pride in their sportsbook which is in good stead in the Australian market. 888 are primarily a gaming company with their casino and poker products leading the way while Betdaq is first and foremost a betting exchange. But one aspect of these companies that will create an added challenge for Ladbrokes is their respective market share. While Sportingbet succeed down under and 888 take a fair slice of the casino and poker market considering their size, Betdaq are a tiny fish in the relatively small pond of betting exchanges.

When breaking the news on January 24th, The Telegraph claimed that Betfair is 20x bigger than Betdaq. Although the article didn’t specify what measurement was used to arrive at this figure, it doesn’t appear to be too outlandish. If it is the case or even if the difference in operating size isn’t quite as vast, it’s undeniable that Betfair are the clear market leaders in the world of betting exchanges, and by some distance at that.

The challenge for the combination of Ladbrokes and Betdaq will then be, can they close the gap between their betting exchange and the brainchild of Andrew Black and Ed Wray. 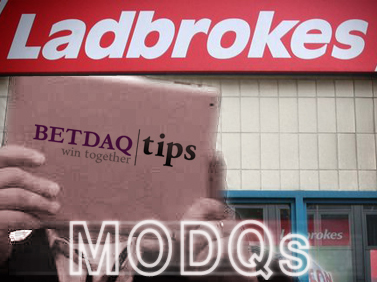 Having been launched in September 2001 Betdaq is by no means a new product to the market so Ladbrokes will have been quite confident about the knowing the ins and outs of the business that they were buying.

But, as is so often the case, this deal isn’t exactly a straightforward cash for business swap. In fact, similarly to how William Hill have approached the Sportingbet sale, Ladbrokes have only purchased some of Betdaq’s operations.

Richard Glynn will soon be in control of Global Betting Exchange Alderney Limited which is the betting exchange operator. However, Ladbrokes has not bought TBH Gurensey Limited which provides the technology that the betting exchange operates on. Rather than buy it outright, Ladbrokes has taken a 10% share in the latter company and has the option to buy the remaining 90% in the next four years. It’s likely that the reasoning behind this move is that they simply don’t know how profitable this side of the business is and as the focus at Rayner’s Lane at the moment is on showing promising digital figures, it was clearly deemed a risk not worth taking.

On the B2C side of things, Betdaq were quick to take the usual step of assuring their customers that their services wouldn’t be negatively impacted as a result of the deal.

The statement explained: “On completion, Ladbrokes will work with BETDAQ to further enhance the competitiveness of the exchange, focusing initially on growing liquidity and event coverage, as well as expanding the range and depth of markets offered.

“Our ultimate ambition is to bring all the great elements of Ladbrokes and BETDAQ together and create an unrivalled betting experience for all our members.”

The use of unrivalled may strictly be true but not in the way that those in charge of the betting exchange would like it to be. When it comes to being unrivalled in this area, it’s hard to look past Betfair. However, given Betfair’s recent focus on fixed-odds betting they may be taking their eye of the exchange ball thus creating an opportunity for Betdaq to gain some ground.

However, Pierluigi Buccioli, founder of Bookmakers Review, explains that despite these opportunities, the gap between the two betting exchanges is just too vast.

“Betdaq is not a start-up,” he says, “but a well established operator that had strong financial backing even before being acquired by Ladbrokes.

“If despite their superior technology platform and more competitive commissions, Betdaq have not been able to take market share away from Betfair, I doubt they ever will.”

Looking from Ladbrokes’ Point of View

Last week saw the release of Ladbrokes’ preliminary results for 2012 in which they were finally able to boast about digital growth. In the chief executive’s review of the company’s overall performance a special mention was made of the Betdaq deal – which was found under the heading ‘Betdaq Offers Point of Difference’.

In this section Glynn explained that the acquisition would allow the bookmaker’s sports betting range to be more comprehensive and that this would provide a better value option for existing customers.

It’s hard to disagree for with any of the above, including the claim that between 20% and 30% of Ladbrokes customers already use betting exchanges. But what there was little reference to was the challenge that Ladbrokes have on their hands because, while it does offer them the point of difference that Glynn referred to, is Betdaq the acquisition that he initially wanted?

The question as to whether Glynn would be signing on the dotted line with Betdaq if his previous takeover attempts had been succesful looms large – and the chances are that he wouldn’t.

Having said that, the deal is now more or less done so will Ladbrokes be able to get Betdaq on a level playing field with the big betting exchange. In his comments, Glynn was quick to mention that the use of the Ladbrokes brand should prove to be a quick boost for the Betdaq betting exchange.

He added: “Our immediate focus is on improving the existing Betdaq exchange, with development wholly provided by a dedicated technology provider. Thereafter we expect to provide an enhanced exchange product as part of the wider Ladbrokes offering.”

How he intends to do that will be of significant interest but according to most he’ll certainly have an uphill task. Buccioli is among those who think it’s unlikely that Betdaq will be able to change its status in the betting exchange market.

He explains: “Whether Betdaq can ever seriously challenge Betfair in terms of liquidity, I don’t think it will ever happen.

“Ladbrokes can certainly help, but I don’t think that Ladbrokes plans to transfer its existing business on the Betdaq platform. They will use it for hedging as I believe they already do, but unless they create a marketing campaign and invest a lot to promote their betting exchange, Betdaq will remain a ‘supporting actor’ rather than the market star.”