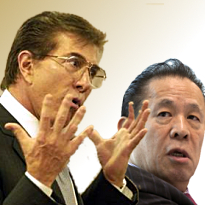 Kazuo Okada probably saw the writing on the wall. No matter how many lawsuits he threw at nemesis Steve Wynn, it wouldn’t have changed anything. So, in what ended up being a pre-emptive move as a means of saving face, the Japanese tycoon who, at one point, was the biggest shareholder in Wynn Resorts, vacated his board of directors seat late last week.

In the end, it wouldn’t have mattered had he not resigned because the company’s shareholders overwhelmingly voted on booting out Okada from the company with Wynn Resorts announcing that the proposal to remove Okada as a director was approved by a staggering 99.6 percent of the over 86 million shares who voted. Now that Okada is out as a director of the company, the Wynn Board now only has eight directors, six of which are independent directors.

In what has become a typical response anytime one side opens comes out with a statement, Okada’s Universal Entertainment bemoaned the rationale of holding the special shareholder’s meeting that booted the Japanese billionaire out of the board of directors, claiming that the meeting was nothing more than a “wasteful charade” and was the “latest misguided step in Mr. Wynn’s retaliatory campaign to attack and discredit Mr. Okada.”

“This special meeting,” the Universal statement added, “has no purpose and no ability to move the business of Wynn Resorts forward. We believe that burdening the company and its shareholders with the expense of this meeting also raises questions in terms of legality.”

There’s no question that this feud between Steve Wynn and Kazuo Okada is far from finished. But if you’re scoring it by rounds, Wynn takes this with a seemingly emphatic 99.6 percent edge over his one-time bosom buddy.