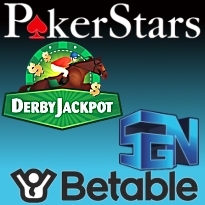 Just a day after we learned that Facebook would host a Zynga real-money gambling product in jurisdictions where such activities are legal, comes word that PokerStars is working on a poker product for social networks. Stars head of corporate communications Eric Hollreiser confirmed to PokerFuse that it had “R&D teams working on potential offerings” for the social networking realm, although said projects hadn’t yet progressed to the beta-testing stage. Hollreiser declined to offer either a timetable for when its social offering might emerge or whether it would include a real-money component.

Social and mobile games publisher/developer Social Gaming Network (SGN) has become the latest outfit to team with Betable for real-money play. The Los Angeles-based SGN will begin offering real-money play on games like Bingo Blingo in legal markets in the first half of 2013. Since August, Betable’s social gaming client list has grown to include Big Fish Games, Mandala Games, Slingo, Digital Chocolate and Murka Games.

Betable founder Chris Griffin told Bloomberg Businessweek that casino games were just the start for further monetizing the social games field. Griffin related a story about designers creating a game in which players raised their own horses, Farmville-style, then raced those horses against other players. “Real money resets everything and creates a level playing field. This is not an incremental change. This is really a tectonic shift.”

Social horserace betting outfit Derby Jackpot is unlike other US-based social gaming outfits, in that its racing focus means it doesn’t need to go abroad to offer real-money wagering, as such activities are legal in most states under the terms of the Interstate Horseracing Act. Derby Jackpot has been in closed beta for five months, with a proper launch expected early in the new year. The company recently threw a party at a New York sports bar to (a) offer punters a preview of what to expect and (b) to emphasize Derby Jackpot’s social aspect. As one of the three Hessert brothers behind Derby Jackpot told The Verge, “we’re like a gas station that sells lottery tickets. We’re not the house. We get a small percentage of every bet placed through our site and we want all our players to win because it’s a more fun experience.”