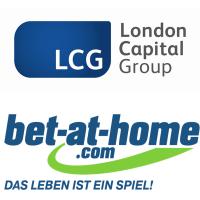 Spread betting firm London Capital Group have reported chairman Richard Davey has departed the firm. A stock market update this morning stated Giles Vardey, a non-executive director, would assume the role of non-executive chairman of the board from August 10. Davey was thanked for his “hard work and efforts” over the five years he was with the firm. LCG’s latest results saw a halving in profits due to poor foreign exchange performance. The company’s spread betting and contracts-for-difference (CFD) results remained solid.

European sports betting firm bet-at-home had Euro 2012 to thank for increased turnover in the first part of the year that masked decreases in earnings. For the half of the year to June 30 2012 gross gaming revenue increased 19.8 percent to €42.11 million with betting and gaming turnover up 25.9 percent thanks to the European Championship in Poland and Ukraine. It was the earnings before interest tax and depreciation (EBITDA) that disappointed as they dropped from €3.83m to (€3.39m) due to heavy investment in advertising and marketing. The company also released results for the second quarter with net gaming revenue up 27.8 percent to €19.39m and gross gaming revenue increasing 24.5 percent to €21m. Betting and gaming turnover went up 28.2 percent but it was the same story with the EBITDA as it dropped from (€0.01m) all the way to (€5.33m).

Swedish slots firm Quickspin has applied for a licence with the Alderney Gambling Control Commission (AGCC). The developer has asked to be granted a core services associate certificate so that it can give software to anyone holding an AGCC operating licence. Various members of Net Entertainment and Unibet founded Quickspin.