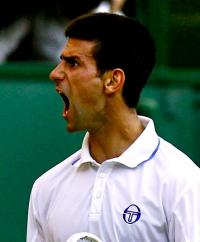 The turnover between the French Open and Wimbledon is pretty quick so there’s no rest for the weary for these tennis players. That being said, the odds for both the men’s and women’s tournaments have already been set and to no one’s surprise, oddsmakers have penciled in Novak Djokovic and Maria Sharapova as the front runners.

Last time we saw Djoker, he double-faulted his way to runner-up status at Roland Garros, all but handing the title to Rafael Nadal. Incidentally, Rafa was the favorite to win at the French Open, but this time, that designation belongs to Djokovic, and rightfully so.

He’s the defending champion and save from his defeat at the hands of Nadal a couple of weeks ago – no shame losing to the King of Clay, by the way – Djokovic has been on an all-time run, winning three grand slams in a row that coincidentally began with his 2011 Wimbledon triumph over Nadal.

So at 2/1 odds, bookmakers give Djokovic a huge chance of defending his title in the grass. Not far behind are Nadal and Roger Federer, arguably two of the greatest tennis players in history. Nadal has been given 9/4 odds while Federer, a 7-time Wimbledon champ, is close behind at 4/1.

There are few people in this world who will disagree with the growing sentiment that Roger Federer is on the decline. He hasn’t played in a Grand Slam final since the 2011 French Open and even more alarming, he hasn’t won a Grand Slam title since the 2010 Australian Open. But 4/1 odds for somebody that has won Wimbledon a record seven times? Might be some value there, yes?

After the Big 3, world number 4 Andy Murray will undoubtedly play the tournament dark-horse, getting 6/1 odds from the books. From there, it’s a matter of picking who your long-shot winner is. Jo-Wilfried Tsonga has been priced at 17/1. Juan Martin Del Potro is at 22/1 and Tomas Berdych and Milos Raonic have both been given 25/1 odds.

Moving on to the women’s tournament, newly crowned French Open champion Maria Sharapova has earned the favorite status in Wimbledon at 3/1 odds. The Russian hottie had an impressive run at last year’s tournament, losing to Petra Kvitova in the finals despite not dropping a set prior to their match.

In close proximity to Sharapova is Serena Williams, who is currently on offer at 11/4 odds. Williams actually entered the French Open as the favorite but ended up losing in spectacular fashion in the first round to Virgine Razzano. Needless to say, the  four-time Wimbledon champ is looking to bounce back after her worst Grand Slam showing in an otherwise illustrious career.

Third favorite to win the title is defending champion Petra Kvitova with 4/1 odds.  Judging by how closely priced these three are, brackets and seedings could play an important role in determining which of the three have the easiest road to the finals.

World number 2 Victoria Azarenka might have the most value as far as her 8/1 odds are concerned. Remember, she had a pretty good showing at Wimbledon last year, losing in the semi-finals to Kvitova. On top of that, she annihilated Sharapova earlier this year at the finals of the Australian Open on her way to winning her first Grand Slam. And, yeah, there is that thing about being ranked number 2 in the world. So yeah, there’s some decent value there.

Speaking of decent value, if we gave you 25/1 odds on a woman who has won Wimbledon five times and has the kind of style suited for the grass, wouldn’t you pounce on it like you would a cold Heineken on a hot summer’s day?

If so, then prepare to ride to battle with Venus Williams.

And if you’re really the canny type, looking to score the long odds, a few women have been priced to make you lay some cash on them. Sam Stosur and Caroline Wozniacki are both at 25/1 while former Wimbledon champ Ana Ivanovic is at 50/1. Last but not least, 2012 French Open runner-up Sara Errani is at 100/1.