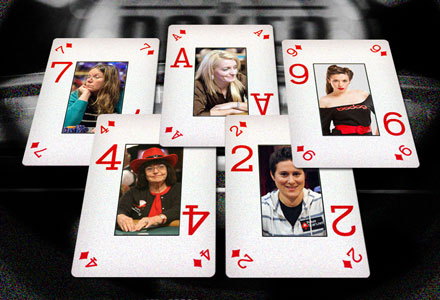 There was a time when a woman at a WSOP final table was a rare sight. Over the last decade more women than ever have taken up the game, though, and the WSOP has added significantly more events to its annual schedule. Now it’s not uncommon to see a woman contending for a bracelet in any tournament – and in fact, through the first 10 non-heads-up events at this year’s WSOP, women have been among the final players vying for a bracelet in half of them. None of the ladies have managed a bracelet win yet, but a few of them have come as close as possible without actually claiming the gold. Here’s a look at the five WSOP events that have seen the best results by women so far this summer.

Re-entry tournaments, where a player can bust from the tournament on one day but come back to play again the next, have become popular in just the last couple of years. This event was the WSOP’s first foray into that new territory – and it also became the first open-field tournament of the Series so far to see a woman battling heads-up for the bracelet.

Former Bodog sponsored pro player Amanda Musumeci of Philadelphia came to the final table third in chips, giving her an excellent chance to become the first woman to win an open-field event at the WSOP since Vanessa Selbst won the $1,500 Pot-Limit Omaha event in 2008. She entered the heads-up match with Ashkan Razavi of Coquitlam, British Columbia, facing a deficit of nearly 11 million chips – 110 big blinds at the 50K/100K level. Undeterred, she managed to double up once to cut Razavi’s lead to 8.5 million. In the end, the lead proved too much to overcome and Musumeci finished second.

Though she fell short of winning her first bracelet, Musumeci earned by far the largest live tournament cash of her career – $481,643. That topped her previous best of $130,997 in the 2011 WSOP Main Event.

As mentioned above, if she’d won Event #9, Amanda Musumeci would have been the first woman since Vanessa Selbst to win an open-field event. But in the first of those events available on this year’s schedule, Selbst actually had a shot at following up her 2008 victory.

Event #2 drew a field of 2,101 players, and Selbst was among the last nine fighting for the bracelet. The former law student and world-class pro entered the final table in fourth place, behind fellow pros Jacob Bazeley, Brent Hanks, and Andrew Badecker, but by the dinner break had jumped to second. She didn’t manage to stay there, though, falling to short-stack status after folding on the river in a big pot against Bazeley. Shortly afterward she would finish in fourth place when her K-7 couldn’t crack Badecker’s K-Q. She took home $161,345, the first six-figure score of any woman at this year’s Series.

There’s probably no more routinely overlooked event at each year’s WSOP than the Casino Employees Event. It’s traditionally been the first event on the schedule, overshadowed by either large-scale $1,500 donkaments or splashy high-profile events like the $40,000 40th Anniversary Event a few years ago, or the last, overshadowed by the Main Event. The money is smaller than in most of the open-field events, but that doesn’t stop hundreds of employees from casinos all over from turning up to compete.

Since so many casino employees are women, it’s no surprise to see lots of them do well in an event like this. No less than nine of them made the money in a field of 732 players, including two – Amy Brady and Carisa Schweisberger – who were eliminated at the next-to-last final table. But the best performance was by Patricia Baker, a poker dealer from Little Torch Key, Fla., who recently moved to Las Vegas to deal at the Rio.

Baker nearly became the first woman ever to win the Casino Employees Event, advancing to the heads-up match against blackjack dealer Chiab “Chip” Saechao, but Saechao’s 1.6-million-to-600,000 chip lead proved to be too much to overcome. Still, the poker dealer earned $43,754 for the runner-up spot – not bad for a $500 tournament, or for her first WSOP cash.

Of the 33 women who played in Event #4, only four cashed – but all of them finished in the tournament’s top 13 spots.

Two veteran women came up short of the final table. Linda Johnson, the former publisher of Card Player magazine, founder of the Tournament Directors Association, and member of the 2011 class of the Poker Hall of Fame, took 13th place for $8,027. Finishing ahead of Johnson but just missing out on a trip to a ninth career WSOP final table was Marsha Waggoner, who earned $12,822 for a 9th-place finish.

The two women who outlasted them both made the final table with short stacks and weren’t able to scoop enough chips to survive for long. The first out was Bonnie Rossi, a retiree from Federal Way, Wash., who finished in 8th place after being knocked out by Michael Mizrachi. The $16,684 cash was Rossi’s third at the WSOP – all of them in Stud Hi/Lo. The last woman standing was Xuan Liu of Toronto, who was also knocked out by Mizrachi. The 6th-place finish for $29,985 was the third in a string of high-profile final table finishes for the Canadian pro, who finished 4th at this year’s PokerStars Caribbean Adventure for $600K and 3rd at last year’s EPT San Remo for $524K.

The biggest story of Event #7 was the triumph of Andy Bloch, who won the first gold bracelet of his career after a number of high-profile runner-up finishes and did so against a final table that included the likes of Barry Greenstein and David Williams. But lost in the shadow of Bloch’s win was the accomplishment of Caroline Hermesh of Summerland, British Columbia.

One of just two women to cash in Event #7, Hermesh surpassed Cheryl Bradley’s 23rd-place finish by ending her tournament in 7th place, outlasting a slew of top pros who made the money including Fabrice Soulier, Steve Billirakis, Chau Giang, Marco Traniello, Brett Richey, Vitaly Lunkin, and Justin Smith. She was also the final Canadian left in the tournament, and the only player from outside the United States to make the final table. Making her feat all the more impressive was the fact that this was Hermesh’s first-ever cash at the WSOP.