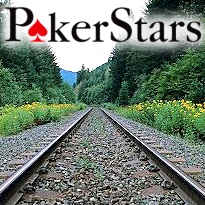 Having extended the reach of its real-money mobile app across Europe last month, PokerStars has now brought mobile poker to the teeming masses in the Asia-Pacific region. Players in Asia, Australia and New Zealand can now access PokerStars on the go via their iPhones, iPads and most Android devices. PokerStars has also tweaked its iOS client to allow Apple fanboys to play Stars’ Rush Poker-clone Zoom Poker, after having already let those Android ruffians through the door.

To properly pimp their mobile app in the UK, Stars has tapped Transport Media to launch a four-week outdoor advertising campaign along the Southern Railway network. The campaign is built along a “pray for a delay” theme, although, as most UK train travelers will attest, prayer is rarely required to achieve that result. Transport Media suggested train passengers synched up nicely with Stars’ target audience, in that frequent rail users are twice as likely to own a smartphone and that 64% of tablet owners use the devices while commuting.

Stars is also conducting a ‘where have you done it’ online contest in which mobile app users are invited to take a photo of themselves playing PokerStars Mobile in unusual or exotic settings, then upload said photo to Twitter with the hashtag #playpokerhere. The best pic wins a free iPad 2, but you best hurry up getting to the top of Mt. Everest because the contest closes May 30. Oh, and you can forget that shot of you playing the app while restrained in a leather harness as a double-d dominatrix flogs you with a riding crop – PokerStars won’t accept images involving sex or violence. CalvinAyre.com, however, will accept whatever your twisted little brains can concoct.