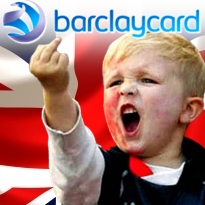 Some punters in the UK got a rude awakening Wednesday when the Telegraph reported that Barclaycard will apply a 2.99% fee when cardholders use their cards to wager. Essentially, bets are now being treated as cash advances rather than purchases, with all the heinous interest charges that cash advances entail. The change, set to take effect May 28, will apply to both bets and lottery ticket purchases. There’s no indication as to what prompted Barclaycard to make the switch, although the chance to grab great gobs of extra cash sounds about right. Other cardholders should probably think twice before taunting poor Barclaycard users, as there’s rarely a fee introduced by one company that isn’t more or less immediately adopted by all the rest.

The government is hoping to institute the tax revamp by December 2014. By the time the 2016-17 tax year rolls around, the government expects to be reaping an annual £270m. Government spokes-folks are trumpeting the no-tax policy on wagers placed from outside the UK as the spoonful of sugar to make the medicine go down, but it ain’t helping. 32Red CEO Ed Ware told Gambling Compliance the new tax regime would result in “less choice and less value on offer for the UK player.” To really twist the knife, Ware dared make comparisons to the notoriously operator-antagonistic French market. Ware also suggested legal action might be a last resort if politicians didn’t realize the error of their ways.

POC tax increase a bad omen, and no surprise at all
Rafi Farber
23 October 2018