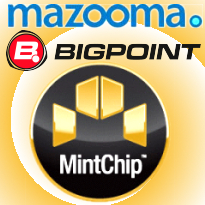 German game developer Bigpoint has inked a deal with micropayment processor Mazooma, enabling US players to purchase virtual goods credits for use in Bigpoint titles such as Battlestar Galactica Online and DarkOrbit. Mazooma offers transaction fees at half the rates of most credit cards, making it a good fit for the kind of real-time microstakes purchasing needs of online gamers hoping to clear a particular level during the same playing session. Bigpoint VP of Finance Linus Menden cited Mazooma’s status as “the only vendor in the US that offers real-time bank transfers” as helping seal the deal. Mazooma’s payment network supports 15 of the largest banks doing business in the US.

In other digital currency news, having earned praise for its recent decision to curtail production of copper pennies, the Royal Canadian Mint’s R&D department pushed the envelope last week with its plans for MintChip, a completely digital method of payment. The technology stores value in a microchip, from which encrypted “value messages” can be transmitted to other microchips. There’s no centralized database, making the digital funds as anonymous as a traditional paper banknote. And just like real money, should you lose the device containing the chip, you’ve also lost whatever funds were stored on it.

Comparisons with current anonymous digital currency headline-grabber Bitcoin are inevitable, but unlike Bitcoin, MintChip will have the backing of a central authority. MintChip is also more of a digital wallet than a true standalone currency. Regardless, the Mint’s CFO Marc Brûlé has gone on record with his disdain for Bitcoin, telling Reuters that Bitcoin “may work for the small group of people that believe in its value, but that could change very suddenly.” (That sound you hear is every Bitcoin-loving hacker warming up his coding fingers to go after the Mint’s website.)

The Mint’s release suggests the company is aiming at MintChip being used for small everyday purchases, at least initially. “The emerging digital economy must be able to accommodate small-value transactions, such as micro transactions (under $10) and nano-transactions (under $1).” To help get the ball rolling, the Mint is sponsoring the ‘MintChip challenge,’ in which software developers are invited to propose ways to use the technology. As proof that the Mint has an ironic sense of humor, a panel of judges including Mint CEO Ian Bennett and Google’s VP of payments will award the best proposal the handsome sum of $50k – in gold.