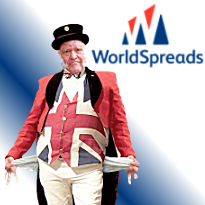 Spread betting firm WorldSpreads will formally announce insolvency proceedings on Monday after an apparent accounting fraud led to a shortfall in client funds estimated between £10m and £12m. The company suspended trading in its AIM-listed shares on Friday, citing questions regarding “financial irregularities” on its books. Friday’s announcement followed the abrupt and unexplained departure two days earlier of CEO Conor Foley and financial director Niall O’Kelly. In a disturbing echo of the Full Tilt Poker debacle, the Financial Times is reporting that WorldSpreads’ problems are the result of the company having failed to segregate client accounts from company funds.

WorldSpreads was to have made an application to the High Court for an administration order on Sunday. The insolvency will be managed by KPMG, which is already overseeing the insolvency of the UK arm of scandalized US brokerage MF Global, another company that collapsed after failing to segregate funds, leaving customers out an estimated $1.6b. WorldSpreads is thought to have some 5,000 customers, who are now scrambling to figure out what’s going on with their money. The first £50k of each account is secured under the government’s Financial Services Compensation Scheme, but anything above that sum may be in jeopardy. WorldSpreads’ auditor, Ernst & Young, are likely to have some splainin’ to do for having signed off on the company’s annual reports while the alleged chicanery was taking place.

Founded in Ireland 12 years ago, WorldSpreads went public in 2007 and grew to become one of the UK’s largest spread betting operations. Rival spread betting outfits IG Group and Betfair subsidiary London Capital Group were tipped as possible takeover saviors of WorldSpreads, but after consideration over the weekend, both companies chose discretion as the better part of valor. WorldSpreads chairman Lindsay McNeile, who on Friday dismissed suggestions that the company was holding substantial client trades it couldn’t unwind, said the revelations “hit us with enormous force in a dark tunnel.” They also add weight to Calvin Ayre’s suggestion that regulation isn’t a magic bullet to prevent executive misdeeds.