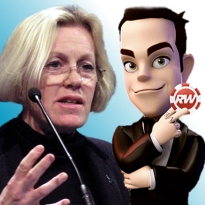 Liberal Democrat MP Tessa Munt has slammed UK pop singer Robbie Williams over Williams’ plan to launch a free-play online poker site. Munt, last seen trying to get the communications industry regulator to crack down on the number of gambling ads on the Munt family telly, claims to be “absolutely outraged” by the “deplorable” RobbieWilliamsPoker.com site. The site is powered by Pokermania, the German b2b media & marketing outfit that also provides social gaming ‘casual poker’ software, and is currently in beta release.

Robbie’s site may be free-play, but there are options to buy virtual chips. This, apparently is what set Munt’s phaser on ‘kill’, plus the fact that the site was being promoted via email to Robbie’s registered fan base. Evidently convinced that Robbie’s fans are the same doe-eyed pre-pubescent girls who followed his insipid but mega-selling boy band Take That in the mid-90s, Munt said “young people are hugely susceptible to this sort of advertising and I am totally opposed to it. It directly targets his fans, including a new generation of children.”

Since embarking on a wildly successful solo career, Williams has become a UK tabloid mainstay, especially as he dealt with various forms of addictive behavior. He’s now pushing 40, and his fans have grown up/old along with him, so a free-play poker site hardly seems worth protesting. But Munt maintains that there’s “no excuse for doing this … I hope he puts every single penny he makes from it into addiction charities or to help victims over this kind of problem. I’m very surprised he is doing this. I think it is awful.” Following Munt’s missive, Robbie’s spokesman told the Daily Mirror that the online poker plan was in the early stages and that the site’s “main focus is not money.”

Munt better brace for more blowback. Robbie is a well-decorated veteran of some very public wars of words with various UK celebrities over the years, including Oasis’ Gallagher brothers, with whom Robbie temporarily became BFFs following his decision to quit his boy band. Then came a nasty falling out over who snorted the last rail (or something), which led to the Gallaghers describing Robbie as “the fat dancer from Take That,” which in turn led Robbie to publicly challenge Liam Gallagher to a £200k boxing match. We doubt Robbie would hit a girl, so perhaps Munt’s off the hook. Regardless, our feelings on the whole brouhaha can be summed up by Noel’s comment at the end of this video…