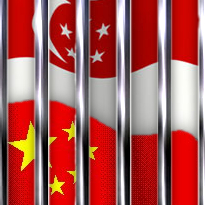 Shanghai police have announced the arrest of 11 individuals charged with organizing online gambling via overseas servers. The chief suspect, a man identified only as Xu, reportedly set up a gambling website that handled 97m yuan (US $15.3m) worth of wagers before the cops closed in. Eastday.com claims Xu promoted his operation via mahjong parlors in Shanghai’s northeast Yangpu District. On Sept 19, Xu was arrested and his computer was seized along with 99k yuan.

Moral of the story: while there are boatloads (junks, even) of cash to be made in Asia, companies need the right structure to take full advantage. As in many other markets (Turkey, Germany, Canada, etc.) operators silly enough to locate their physical operations within the countries to which they offer services run the risk of seeing those operations, er, shanghaied. If that’s not sufficient motivation, consider the recent Reuters article in which an official prison executioner in China claimed his job was “not as complicated as outsiders think … take aim, press the trigger, and that’s that.”

In Singapore, a vegetable seller has been jailed 10 months and fined $90k for running an illegal betting operation inside the Marina Bay Sands casino. Lee Chin Chuan was arrested in June for offering VIP baccarat players ‘insurance’ on their wagers (taking the opposite bet Mr. VIP makes with the house, like a bookie laying off with another shop). When asked why he’d run the risk, Lee remarked that his day job hawking vegetables earned him $2k per month, compared to the $30k he’d earned in less than four months as a bookmaker.

By the time police took down Lee’s operation, he was doing so well he’d hired three runners to drum up even more action. (Two of these runners were sentenced to 4-6 months; the third remains ‘at large’.) Police seized over $78k cash, $46k in casino chips and a check for $100k during the arrest. Lee’s son told The New Paper that the family had never considered requesting that their father be put on the casino exclusion list. “My mum knew that he gambled. It was a source of extra income for us and it was also a way for him to unwind after work.” And father knows best…