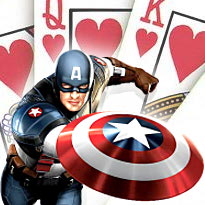 As anticipation builds for this week’s twin hearings in Washington on the subject of internet gambling, we now have some idea as to who will be doing some of the talking. A lobbyist told Chris Krafcik (@CKrafcik) that those appearing at Friday’s House of Representatives Subcommittee on Commerce, Manufacturing and Trade “Internet Gaming: Regulating in an Online World” confab will include New Hampshire Lottery Director Charlie McIntyre, American Gaming Association president Frank Fahrenkopf and Nevada Gaming Control Board chairman Mark Lipparelli. Among the politicians facing them down will be Rep. John Campbell (R-CA), who introduced the online poker ‘CampBill’ back in March, and Rep. Frank Wolf (R-VA), who… well, let’s quote Wolf’s own website, where it lists the ‘byproducts’ of gambling as “crime, corruption, family breakdown, suicide and bankruptcy.” Panelists shouldn’t expect any softball questions from the big bad Wolf.

We don’t know if any of the panelists have devised surefire arguments for or against regulated online poker in the US of A, but the Las Vegas Review-Journal’s Howard Stutz has come up with a goodie. Stutz wrote a column that referenced 2011 World Series of Poker champ Pius Heinz learning to play poker online via PokerStars. Stutz goes on to point out how four of the past seven WSOP champs have come from outside the US, i.e. from countries where online poker is legal. Stutz hypothesized that if future generations of US players aren’t allowed to hone their craft online, they could fall further and further behind the rest of the world. This is brilliant. Just as John Kennedy gained ground against 1960 presidential opponent Richard Nixon by talking up a bogus ‘missile gap’ between the US and Russia, Stutz is hoping US politicians won’t let any damn dirty foreigners open up a poker gap and beat the US at its own game. Given US politicians’ traditional hair-trigger Pavlovian response to primitive nationalism, Stutz may be on to something.