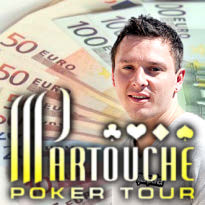 Sam Trickett has won the 2011 Partouche Poker Tour (PPT) main event at the Casino Palm Beach in Cannes, France. Trickett earned a cool €1m for outlasting a field of 579 who ponied up the €8,500 buy-in back in September. (Like the World Series of Poker, the PPT likes to put its final tablers in formaldehyde for a couple months before the big money is handed out.) Trickett’s had a stellar 2011, having final tabled at a WSOP Europe PLO event, a WPT Diamond Championship and the EPT London High Roller, not to mention his Aussie Millions appearance in January, where he won the $100k High Roller event and finished second at the $250k Super High Roller. All told, Tricket’s 2011 take comes to €4.5m, pushing his career live earnings past €6m.

Trickett started final table play with a modest chip lead over Alexandre Coussy but Trickett stumbled early, losing a monster pot to drop all the way to eighth place. Unruffled, Trickett battled back, and when the final nine had been reduced to four at the end of Saturday’s play, Trickett was just a hair’s breadth behind chip leader Salman Behbehani. When it got down to heads-up action on Sunday, Behbehani held an almost 2:1 chip lead, but Trickett chipped away, pulling slightly ahead on the penultimate hand. On the final hand, Trickett’s tens were enough to relegate Behbehani to second place and €600k. WSOP 2011 bracelet winner Oleksii Kovalchuk took third, earning €379k.

Broadcaster ESPN’s Tuesday night ‘almost-live’ 6.5-hour broadcast of the final three players at this year’s WSOP main event scored an average 1.01 rating. While that’s down from the 1.28 rating of 2010’s primetime 2-hour coverage, the ability to sustain the 1.01 rating over a much longer duration bodes well for future unedited broadcasts. As for 2011 WSOP champ Pius Heinz, he told EPSN that once the Sunday action was over, he “watched some of the broadcast, but not much. Maybe an hour. I was confident in my game and … I felt like I had a better chance of playing my own game by not worrying about it too much.” Post-victory, Heinz was even less interested in viewing a replay of Tuesday’s footage. Instead, Heinz went to a bar with third-place finisher Ben Lamb (and Heinz’s flock of 50+ railbirds) where he “just hung out. We had a great time.” Yeah, we bet.