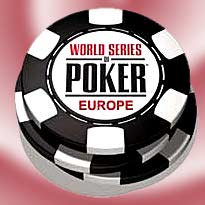 Steve Billiraikis has taken Event #3 at the World Series of Poker (WSOP) Europe, giving the American his second WSOP honor. The first came in 2007 in Vegas at a $5k Mixed Hold’Em event, while this year’s victory came via the €5,300 Pot Limit Omaha event, which attracted a field of 180 players. The final table included such notables as 2011 November Niner Eghan O’Dea (who, fittingly, finished ninth) and Sam Trickett (fourth), but the day (and €238k) belonged to Billraikis, with Italy’s Michele Di Lauro settling for second and €147k, while Sweden’s Ramzi Jelassi took third and just under €106k.

Fellow American Tristan Wade has taken Event #4, the €3,200 NLHE Shootout. From a starting field of 258, it came down to Wade and fellow Yank Michael Watson, but Wade ended up with the bracelet and €182k, while Watson settled for €112k. Hungary’s Richard Toth placed third, earning €84k.

The WSOP-E’s move to France this year was a wise one, if the number of entrants is any gauge. The average field is up over 40% from 2010, and the 771 players in the €1,090 NLHE was the largest in WSOP-E history. The Main Event gets underway Saturday, and James Bord has already thrown down some Euro-smack, saying: ” I don’t think an American can win the bracelet, Europeans are now far superior. We used to look up to the US players back in the day, but those days are now long gone. I’m prepared to put my money where my mouth is and refund any losing bets up to $500 if an American wins.” Hellmuth, are you going to take that sitting down?

When the stateside version of the WSOP reconvenes in November at the Rio in Las Vegas, gamblers will for the first time be allowed to make a number of proposition wagers on the outcome. The Nevada Gaming Control Board has approved five prop bets on the November Nine, including the first player to hit the rail, whether current chip leader Martin Staszko will hang on to take the title, what hand will determine the final outcome, the total number of hands dealt at the final table, and whether the first flop will contain more red or black cards.

On a sadder note, NBC has officially cancelled the National Heads-Up Poker Championship. The annual face-off between poker pros and celebrities was primarily underwritten by PokerStars and Full Tilt, meaning the cancellation would appear to be due to US broadcasters’ efforts to avoid catching any Black Friday-related cooties. However, NBC Sports’ Adam Freifeld told the Las Vegas Review-Journal’s Howard Stutz that the network would “continue to evaluate our poker programming”, hinting that the event may return in 2013. Way to take a stand, Adam.