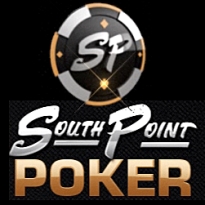 The US land-based casino crowd continues to eagerly prepare the ground for the hotly anticipated legalization of online poker. On Wednesday, the South Point Hotel, Casino & Spa in Las Vegas announced the launch of a free-play online poker site – the first such site to be directly branded under a Vegas casino’s name and tied to its own rewards program.

SouthPointPoker.com will be accessible by members of South Point’s casino loyalty program on Oct. 6, with the general public being allowed in on Oct. 17. Players will compete for cash and non-cash prizes, including vacation packages and $10k buy-ins to the World Series of Poker’s Main Event. The tech platform will be provided by Las Vegas-based Zen Entertainment, which has previously provided such services to the UFC and NBC Sports websites (meaning Zen will presumably be sued by Cardroom International any minute now).

Speaking at the Global Gaming Expo (G2E), South Point owner Michael Gaughan said getting into the online poker game was ”kind of a gamble” because “I don’t know that much about online poker and I’m trying to learn about it with a free site.” But Gaughan, who had previously voiced his support for the failed PokerStars-sponsored AB258 Nevada poker bill, admits his aim is to switch to real-money action if/when he gets the legal go-ahead. “I think it would help business at the South Point and I think I could make money with it as a (standalone) poker site.”

Nevada Gaming Control Board (NGCB) deputy enforcement chief Teresa Zellhoefer told the Associated Press that because regulators viewed Gaughan’s site primarily as a promotional tool, there was no need for them to formally sign off on the launch. However, they used the opportunity to see how the site stacked up against the new online poker regulations the NGCB expects to finalize by the end of this year. “It was kind of a precursor to getting the big ball rolling.”