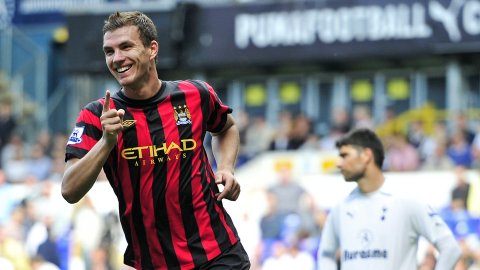 Two of Europe’s biggest soccer leagues saw players go on strike over the past couple of weeks for all manner of issues. Thank fuck the Premier League didn’t follow suit for the 28th August 2011 will go down in folklore after two sides kept the only 100% records in the division with quite the show of power.

What is actually going on right now at Arsenal? After three games they sit perilously close to the drop zone on one point and have failed to pick up a win. Being taken apart 8-2 (yes that’s EIGHT TWO) by Manchester United will do nothing to inspire confidence in boss Arsene Wenger and it’s quite clear he needs signings fast. Three red cards in consecutive games is also a worry.

Fans will also be wondering whether either Manchester club can go unbeaten for the entire season. From where I’m standing, it could easily be City. Yesterday’s 5-1 malling of Spurs reminded of Barcelona at times.

Goal of the weekend

Edin Dzeko managed four at White Hart Lane and saved the best till last with a magnificent curling effort into the top corner of the goal.

Player of the weekend

It’s that man again. Dzeko has proved all those doubting his ability wrong and by netting four at Spurs you could easily see him ending the season top scorer.

After his move down to London to QPR, he sat in the stands at Wigan and played with his phone for a couple of hours. The 2-0 defeat just showed what he already knew: QPR are a crock of shit.

How the gambling industry sponsored sides got on

The Bodog Baggies woes continued after they went down 1-0 with Stoke the visitors to be left on zero points with Spurs and Blackburn. Wolves saw their 100% record go after drawing at fellow industry-sponsored side Aston Villa. Wigan showed they were no pushovers by beating QPR 2-0. Bolton didn’t manage to get anything from Anfield in a 3-1 loss with Swansea and Sunderland playing out a stalemate in South Wales.

Another two stalemates begging the question: is this the most boring league in Europe?