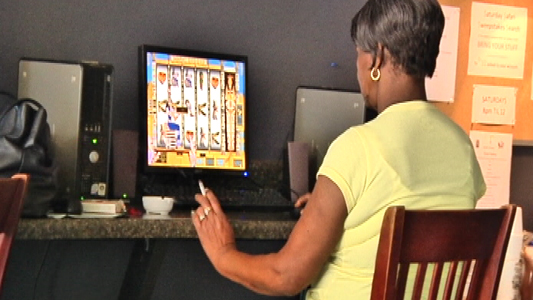 The latest example comes from The Horseshoe, a Florida business that marketed itself as an Internet sweepstakes cafe, but Polk deputies who shut it down, Monday,

said it was being used as an illegal gambling house.

According to The Ledger, The Polk County Sheriff’s Office closed The Horseshoe and arrested 30-year-old Ryan Ault of Orlando, who they identified as the owner of the business.

According to authorities, swipe cards were sold to customers who then played illegal games using software programmed into HP desktop computers, Sheriff Grady Judd said at a press conference outside the business. The Sheriff’s Office said The Horseshoe is the only one of its kind in Polk County, but the businesses have proliferated elsewhere in Florida.

The Legder reports Tallahassee gaming lawyer Marc Dunbar said they have become a billion dollar industry, and they are in communities throughout the state: “We went from having none of these five years ago to having about 1,000 today,” Dunbar said.

That’s what happens when prohibition is used in place of regulation. There’s money to be made and there’s a demand for services, in this case it doesn’t take a criminal mastermind to realize they can gain a buck providing entertainment. The police can continue to target and shutdown these operations, but they’ll just keep popping up. If indeed Marc Dunbar’s estimations that it has become a billion dollar industry are accurate, then not only are police wasting money shutting down these businesses, but the state is losing money on a billion dollar industry.

Sadly, this isn’t anything new.