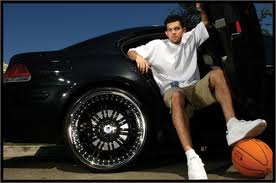 The NBA Lockout continues to drag on with no end in sight, but that hasn’t seemed to stop a number of NBA players from playing professional basketball. So far, the only thing the NBA Lockout has shown NBA players is that there’s money to be made outside the borders of the US.

A number of NBA stars recently showcased their talents for good money in Manila and now another New Jersey Nets guard has reportedly signed a deal to take his talents overseas. Two time NBA champion, Jordan Farmar is the latest NBA player that will be taking his talents to the European leagues after reportedly signing a contract with the Euroleague runner ups- Maccabi Tel Aviv according to Yahoo Sports.

It seems the guards on the Nets are leading the way when it comes to jumping on the overseas money train. Fellow teammates Deron Williams and Sasha Vujacic have already signed to play for Turkish teams, Williams for Besiktas and Vujacic for Anadolu Efes.

Farmar, who is of Jewish decent, has been touted as a welcomed addition to Maccabi Tel Aviv. Argus Free Press reports that Maccabi Tel Aviv coach David Blatt was impressed by Farmar’s “intense desire to play Maccabi Tel Aviv in front of the Israeli public and to contribute as much as possible…Thanks to his deep Jewish roots and his great basketball skills, Maccabi Electra Tel Aviv decided to accept him into the team with open arms.”

Farmar is still on contract with the Nets and his contract with Maccabi Electra Tel Aviv will likely contain an NBA opt out to allow Farmar to return to the NBA once the lockout concludes. When the NBA Lockout will conclude is at this point, anyone’s guess.

As it stands now, obviously the NBA summer league is cancelled, free-agency negotiating is at a standstill, and there are reports that dozens have been laid off from the NBA’s head office. As for the negotiations between the players and the owners, they are so far apart that many are already projecting that regular season games will be missed.

Granted, the gambling industry heard the same type of buzz when the NFL Lockout began, it will be interesting to see if negotiations kick into high gear if the players elect to decertify their union.