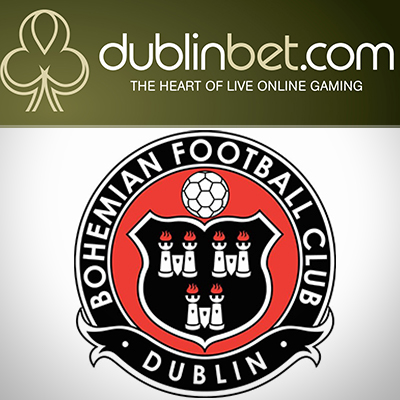 July 27th 2011 (Dublin, Republic of Ireland) – Dublinbet.com and Bohemian Football Club, from Dublin, have signed an exclusive deal that sees the premier live online casino as the Official Shirt Sponsor of Bohemian FC’s home shirt for the remainder of the 2011 season.

Dublinbet.com, today signed an exclusive agreement with Bohemian FC to be the Official Shirt Sponsor of the club’s home shirt for the remaining games in the 2011 Airtricity Irish League and the 2011 Ford FAI Cup.

The deal, which is Dublinbet.com’s first in sports sponsorship, will include a visible presence for the live casino around the club via pitch-side perimeter advertising, matchday programme advertising and online advertising on the club’s website and social media channels.
The joint partnership also includes a revenue agreement whereby Bohemian FC will generate funds for the club based on new players who join the online casino, which streams live from the Fitzwilliam Casino and Card Club in Dublin.

Paul Derwin, Marketing Manager at Dublinbet.com commented: “When we heard that the club were looking for a new shirt sponsor for the remainder of the season we jumped at the chance to support the Bohs and put something back into the Dublin community. We’re as passionate about live online gaming as the Bohs fans are about their team so it makes for a perfect partnership. We hope our involvement will coincide with a successful finish to the season. It would be great to see the Bohs lift a trophy and to be associated with their success.”

Matt Devaney, Commercial Director at Bohemian FC, commented:  “Bohemian FC are delighted  to have Dublinbet.com on board for the rest of the 2011 season in what we are sure will be a mutually beneficial partnership. We feel that Bohemian FC is the perfect vehicle for DublinBet.com to promote their product to both a local and national audience. We will be working hard with all our partners and large fan base to ensure maximum exposure and brand awareness is achieved for Dublinbet . The club would like to thank DublinBet for their generous support of Bohemian FC.”

About Dublinbet.com
Dublinbet.com is an online live casino offering a real gaming experience. It differs from all of its rivals in that customers play online via a direct link to a real brick-and-mortar casino in Dublin, as opposed to a replica environment being broadcast from a studio. All LIVE results are determined from a real game and are not computer generated.

Whilst most online casinos present artificial games that simulate casino play, VueTec’s Distance Gaming™ software allows patrons to participate directly in games being played in a real casino, using only their home PC and internet connection. Live games are played with an easy-to-use graphical interface, and provide live video, audio & results from a game as it is in progress in the casino. For more information visit www.vuetec.com.

About Bohemian FC
Bohemian FC is a professional football club in Dublin who compete in the Premier Division of the League of Ireland. They have been the most successful team in the country in the last decade, winning 4 league championships, 2 FAI Cups and 1 League of Ireland Cup. Visit www.bohemians.ie