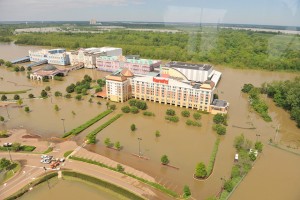 A recent article found in Forbes described how Mississippi casinos have been hurt by perceptions of would-be patrons that the casinos in the state are shut down due to reports of flooding.

Reports of flooding in the state have been ongoing since April since rising levels of the Mississippi river began flooding the media, no pun intended. As Forbes reports, fears of flooding hasn’t been the only deterrent to gamblers flocking to the state, Mississippi’s casino industry also suffered from the highly publicized BP oil spill last summer and aggressive competition from other gambling destinations.

The problems for the Mississippi casino industry has been magnified by the sputtering economy and the lack of available advertising dollars to allay fears that gamblers may have.

According to Forbes, Gulf Coast casinos have fared much better mostly due to the fact that they spent millions of dollars on advertising to encourage Americans to visit the casinos there. BP spent somewhere in the ball park of $27 million on advertising for Gulf Coast counties with casinos.

With bookings down, local officials in Mississippi are now expecting gambling revenue to be down in June. As reported by Forbes, Webster Franklin of the Tunica Convention and Visitors Bureau said, “When you have national media here for three weeks talking about us flooding and being closed, they don’t come back and report that we’re open for business…The perception often isn’t reality.”

The flooding certainly did take it’s toll, as Forbes reports in all, 16 of the 19 river casinos in Mississippi closed due to the flooding and thousands of hotel rooms sat empty and tens of thousands of tourists kept their distance because many casinos were only accessible by boat due to high levels of water.

Mississippi, which ranks fifth nationally among states in terms of annual gaming revenue, saw total gaming revenue fall 3.2 percent in 2010 to $2.39 billion compared to $2.47 billion in 2009. With the doors re-open, it’s now time for casino industry in Mississippi to concentrate on re-shaping the perceptions of gamblers to attract more tourists to the state to return the industry to levels of profitability it was once accustomed to.