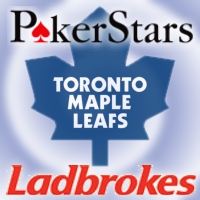 While Black Friday has cast a pall over poker companies’ promotional efforts in the US, all you need to do is to step over the 49th parallel and it’s a vastly different story. PokerStars.net has just renewed its sponsorship agreement with the Toronto Maple Leafs hockey club through the 2011/12 National Hockey League season. PokerStars pro and Canadian native Daniel Negreanu was moved to say: “I have played hockey my whole life and grew up watching the Toronto Maple Leafs, which is why I am excited that PokerStars.net is a sponsor. It is a great relationship and allows the world’s largest online poker school to team up with an iconic franchise to deliver exceptional promotions for poker and hockey fans.” Iconic the Leafs may be, but they haven’t won the Stanley Cup in almost half a century. In poker terms, they might as well rename themselves the Maple Fish.

Ladbrokes has called for a review of its £8m advertising account, part of its plans to spend £50m over the next two years on a rebranding effort to help arrest its profit declines of the past few years. M&S Saatchi has handled Ladbrokes’ advertising since 2007, which included the use of ex-footballers Ally McCoist, Chris Kamara and Ian Wright. Interestingly, Betfair Australia ditched M&S Saatchi Melbourne last month in favor of AJF Partnership. What does M&S Saatchi have, cooties?

While Ladbrokes hopes a new ad firm will add some green to its profit margins, it may also want to think about rebranding its environmental ‘green’ numbers. According to environmental consultancy Carbon Smart, just 23% of FTSE 350 companies are following the UK government’s requirements for reporting their sustainability efforts. Carbon Smart also published a table on how companies ranked individually against best practice sustainability assurance criteria, and Ladbrokes ranked among the worst-performing assurance statements.