Home / Sports / ArsenLOL open up the door for Chelsea 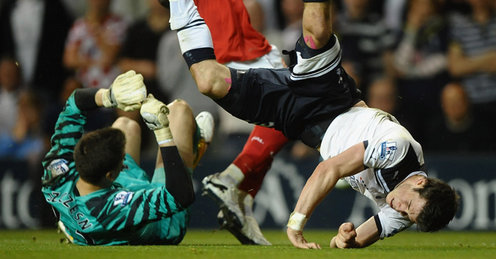 If you needed a demonstration of what Arsenal are really about then last night was the perfect occasion. You had the goals, the LOLS, and…well more LOLS. This is Arsenal though and not even Arsene Wenger can give an excuse for what happens on a yearly basis in the North London derby.

It’s hard to tell which side’s chances were given a bigger dent after last night’s 3-3 draw at White Hart Lane with Tottenham also looking like they might have lost Player of the Year Gareth Bale for a period. The Welshman was pole-axed by Arsenal goalkeeper Wojciech Szczesny who then proceeded to act out the role every Arsenal keeper has fallen into since David Seaman gave up the gloves.

The game came alive as early as the fourth minute as Theo Walcott ran through the Spurs’ defence like a knife through butter to slot in past Heurelho Gomes. Celebrating the goal by telling the Spurs’ fans to be quiet was nothing compared with opposition-fan-baiting guru Rafael van der Vaart’s post-goal frolics.

Szczesny showed his first piece of profligacy here as he was beaten at his near post from the edge of the area and van der Vaart proceeded to outdo Walcott ten-fold. It wasn’t long before Arsenal was back in front as Samir Nasri fired in through bodies from the edge of the area. When William Gallas tried to chest the ground only to present the ball to Walcott he crossed for Robin van Persie who made it 3-1.

This was when Szczesny turned on the LOLmeter. After the Bale injury and the smug smile-wink that followed he managed to resemble a slug on his own goal-line by letting in Tom Huddlestone’s effort on the stroke of half time. The coup de grace came in the second half as he inexplicably brought down Aaron Lennon to gift Tottenham a penalty and van der Vaart’s second gave them a share of the spoils.

The side that benefited the most from Arsenal’s slip up were finishing off relegation threatened Birmingham City in some style in West London. Two goals from Florent Malouda, one from Salomon Kalou, and none from Fernando Torres gave Chelsea a 2-0 win and second place in the league.

Chelsea has the far easier run-in amongst the top three sides and could easily still pip United to the title and see that the Mancunians end the seasons with no trophies.