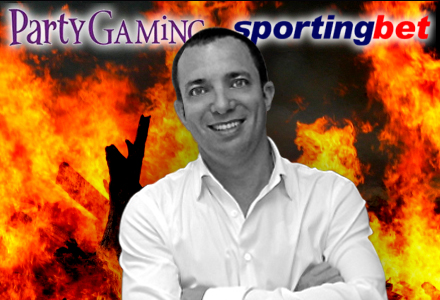 As we noted yesterday, Black Friday’s online poker indictment has cast an ominous shadow over the 700-odd employees at Pocket Kings, Full Tilt’s operation in Dublin. The same scene is being played out in the offices of the other indicted poker rooms and all their affiliated companies. Then there’s the collective uncertainty facing poker affiliates, members of the poker media, television producers and networks, apparel manufacturers, mixed martial artists and, oh yeah, millions of poker players, many of whom rely on poker to feed and house their families. Needless to say, emotions are running high.

Understandably, people want a focus for their anger. Payment processor Daniel Tzvetkoff is an easy target, but the investigations that led to Black Friday began long before the Australian oaf’s 2010 arrest. Documents released by the US Attorneys Office indicate that PartyGaming had been cooperating with the Department of Justice since Spring 2007, one year into Mitch Garber’s tenure as CEO.

Garber’s rationale for steering PartyGaming into the DoJ’s fold is a matter of some debate. That Garber himself would benefit from the deal is apparent enough. The issue is whether Garber, who was in reality just a fresh-faced go-between that PartyGaming’s owners trotted out to deal with regulators and bankers, had the authority to take the company to the DoJ’s ‘negotiating’ table over the objections of major shareholders like Ruth Parasol. The deal, which I. Nelson Rose regards as an unnecessary liberty taken with shareholder’s money, would have included a requirement to make disclosures and submit documents intended to lead the DoJ to other instances of supposed wrongdoing by online gaming companies. Other online gaming companies.

ARE YOU NOW, OR HAVE YOU EVER BEEN, A MEMBER OF THE ONLINE POKER COMMUNITY?
There’s a distinct echo of McCarthyism in this requirement to inform on one’s competitors. It conjures images of the Hollywood icons that were told to kiss their careers goodbye unless they were willing to accuse their peers of having Communist sympathies. Simply confessing your own alleged sins wasn’t sufficient; you needed to place an offering on the altar. Some refused to implicate a peer and were subsequently blacklisted. Others – including director Elia Kazan — made their rationalizations, did the deed and went back to work. There’s no denying that Kazan’s body of work deserved a lifetime Academy Award. There’s also no denying that as Kazan walked to the podium to accept his Oscar, many of those in attendance sat with their arms folded. To these people, it didn’t matter that Kazan’s testimony had been given some 47 years earlier. What mattered was that lives had been ruined so that someone could further their professional ambitions.

There have been many personnel changes at all levels of PartyGaming since 2007, even more since this year’s merger with bwin to form bwin.party (Pwin). Perhaps many of the new faces in the Pwin ranks regard Mitch’s deal with the same scorn we now reserve for those old newsreel films of fat, sweaty ‘Tailgunner Joe’ McCarthy berating helpless witnesses. Then again, since bwin boss Norbert Teufelberger was openly rooting for the arrest of PokerStars and Full Tilt execs just last year, perhaps not. There’s no evidence yet that any bwin figures have similarly cooperated with the DoJ, but since the Pwin merger was (in part) intended to blend the DoJ’s perception of bwin with that of friendly witness PartyGaming, one assumes their philosophical stances were equally simpatico.

NOW HOW MUCH WOULD YOU PAY?
The same could also be said of Sportingbet. A condition of its 2010 DoJ settlement was the disclosure of info surrounding Sportsbook.com. However, it’s unlikely the DoJ garnered anything useful from this disclosure, as the undisclosed shareholders of Sportingbet PLC and those of Sportsbook.com were one and the same, so we are sure they would not disclose anything too damaging. Were they equally as discreet when pressed for info on PokerStars, Full Tilt and/or Cereus? We’d like to think the best, but Sportingbet’s track record doesn’t inspire us with confidence.

When Sportingbet announced in 2006 they had sold Sportsbook.com to a shell company for $10 and the assumption of debt, minority shareholders were outraged. In the press release announcing the sale, Sportingbet claimed to have searched high and low for a buyer without result, despite accepted industry knowledge that there was an arms-length starting $5m offer on the table at the time. Had they been made aware of the offer, shareholders would have been outraged at Sportingbet’s public misrepresentation, even more so had they learned that the company that paid $10 for Sportsbook.com consisted of many of the principals who were supposed to be out looking for a real buyer.

Do scoundrels ever prosper? Garber managed to parlay the confusion over his actual role at PartyGaming into his current gig as CEO of Caesars (formerly Harrah’s) Interactive. He even convinced Harrah’s to locate its head office in Garber’s hometown of Montreal. Cozy. As Harrah’s/Caesars has since discovered, keeping Mitch in his comfort zone isn’t helping their Interactive operation get off the ground. (Caesars Inactive?) And if Caesars changes its name yet again ahead of its much-desired return to the public market, Mitch might be the first ever CEO of a gaming company that changed its letterhead three times before taking a bet. Then again, perhaps never taking a bet is part of Mitch’s strategy to ensure he’s never in a position where someone else can inform on him.