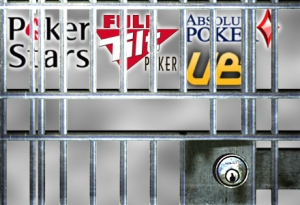 Something that got lost in Friday’s media storm — New Jersey Sen. Ray Lesniak announced that his state’s online poker referendum bill is to be introduced on Friday, April 29. As if on cue, legal analyst Dan Abrams appeared on ABC News to voice the opinion that, while he believes that a regulated US online poker market is “inevitable,’ Friday’s indictments mean that in the short term, “it’s going to be very tough to legalize it.”

✖ The Las Vegas Review-Journal is reporting that Nevada State Sen. Greg Brower is calling for federal and state investigations into PokerStars’ lobbying efforts. Brower was incensed to learn that PokerStars had launched a political action committee that doled out $272k in campaign contributions to 68 candidates in last year’s mid-term elections. Brower said he found it “troubling” that “a foreign company which has been charged with operating a criminal enterprise could play such a large role in Nevada campaigns.” Brower intends to discuss the matter with both Nevada authorities and the Department of Justice “to determine whether federal and state investigations into PokerStars’ activities in Nevada are warranted.”

✖ The Cereus Network sites mentioned in Friday’s indictment have followed PokerStars’ lead by switching to .eu domains, while Full Tilt is now operating from FullTiltPoker.co.uk. All of which begs the question why, in this day and age, would an online poker company still have its domain name registered with a US registrar? Clearly, when the DoJ comes knocking on GoDaddy’s door, their CEO is simply going to hand over UB’s domain so he can more quickly get back to shooting elephants for sport. 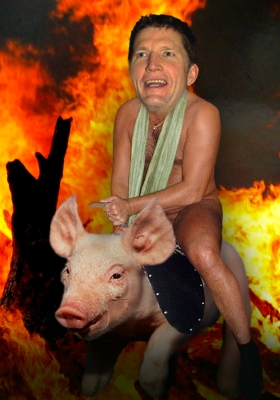 Barcelona resident Bryce Vincent Geoffrey is a Canadian-licensed lawyer believed to own one of the few remaining US-facing poker companies.

✖ Cereus may be taking a more confrontational stance than Stars or Tilt, i.e. not committing to unconditionally walking away from the US market. Registered US players are reportedly still being welcomed onto real money tables at AP and UB, but all deposits, withdrawals and transfers have been ‘temporarily’ suspended while the sites “work on a resolution.” Are they emboldened by the fact that, of all the site’s indicted principals, AP founder Scott Tom faces only the less serious UIGEA violation charges? Indeed, a UB player received an email from the site’s support staff stating that there is “nothing to worry about.” Balls of steel, or fools rushing in where angels fear to tread? Watch and learn…

✖ John Campos, the indicted vice-chairman of Utah’s SunFirst Bank, is scheduled to appear in a St. George court Monday at 1:30pm. Meanwhile, SunFirst’s lawyer Loren Weiss says Campos had no authority to make deals on behalf of the bank. Weiss told local media outlet The Spectrum that the indictment “doesn’t affect the bank at all.” In fact, Weiss’ perspective is that the indictment portrays SunFirst as a victim. As for the $3.4m that was allegedly invested in SunFirst by defendant Chad Elie and “Elie’s Partner” that gave them a 30% stake in the bank, Weiss claims SunFirst “didn’t enter into any agreement like that. The sale of stock is something that requires board action. Nothing like that happened.” Weiss also maintains that SunFirst never had a direct relationship with any of the accused poker companies. “The only contact they had was with third-party payment processors. The third-party payment processors have many customers, none of whom the bank has any relationship with.”

✖ Full Tilt’s mega-high roller Onyx Cup poker series, which was scheduled to start May 11 in Las Vegas, has been cancelled. The fate of PokerStars’ North American Poker Tour appears dubious. Meanwhile, ESPN.com has stripped all PokerStars advertising from its poker page.

✖ Now that Fertitta Interactive has announced that its deal with Full Tilt has ‘expired,’ the likelihood of Full Tilt being allowed back into the fold of approved Ultimate Fighting Championship sponsors has effectively been choked out. FullTiltPoker.net had remained an active sponsor of individual UFC fighters, as well as a main sponsor of MMA outfit Strikeforce (which was purchased by the UFC on March 12). Ken Pavia of MMA Agents believes the indictment could “severely impact fighters’ sponsor revenue, which traditionally matched their show pay for our televised clients. I would venture to say the poker industry is equal to apparel industry as the No. 1 sponsor of fighters outside the UFC.” The only comment a Strikeforce rep was willing to give MMAJunkie was that they are “looking into the situation specifically how it relates to our deal.”

✖ Forum posters have been lamenting the lack of indictment commentary from many of PokerStars’ sponsored pros. Indeed, a quick read of a lot of PokerStars pro players’ Twitter feeds would have led one to believe that it was business as usual. Finally, on Saturday, Daniel Negreanu explained the radio silence: “Not ignoring #BlackFriday and as much as I’d love to discuss it, I’ve been advised not to for now. As soon as I can, I’ll add my two cents.” Two cents? Wow, Danny’s been reduced to playing for microstakes… This really is a big deal.

✖ Speaking of, many observers have questioned why some poker pros who reportedly hold ownership stakes in the indicted companies, such as Full Tilt’s Chris ‘Jesus’ Ferguson, were not included in Black Friday’s rogues’ gallery. For the record, we don’t think even the DoJ would go that far — it’s one thing to pick on faceless execs, quite another to go after quasi-celebrity figures. After all, most prosecutors (especially the ones that pursue cases guaranteed to generate media headlines) view their current position purely as a stepping stone to elected office. This may explain why DoJ figures at the heart of this case have been so keen to stress that Black Friday’s charges relate to fraud and money laundering, i.e. it’s not a direct assault on the game of poker itself, which most sane observers agree is an utterly benign form of entertainment. These attorneys have already pissed off one voting bloc (the nation’s poker players). No sense pissing off all libertarians, too.