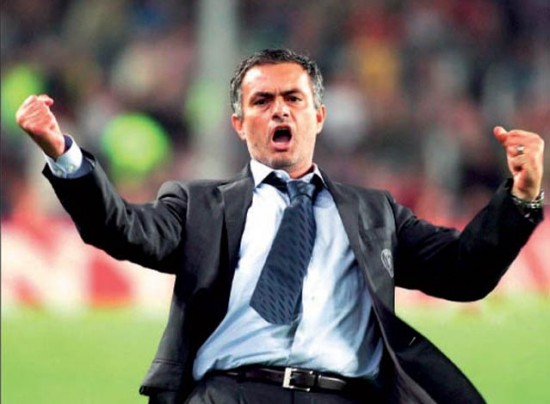 It’s hard to tell whether Jose Mourinho will be relishing his next assignment as Real Madrid boss as his side now face Barcelona a total of four times over 18 days. It’s scant reward for dominating both legs of a Champions League quarterfinal with Tottenham Hotspur. Though, to win the biggest prizes you have to beat the best.

Last night’s second leg could have gone the other way if the referee had been swayed by the fevered atmosphere of hope inside White Hart Lane. He wasn’t. Tottenham could have had two penalties. They didn’t get them. Then Heurelho Gomes did what he does best; flapped at a shot that eventually squirmed into the net.

That long range strike was Cristiano Ronaldo’s 40th in all competitions this season and the home fans’ only response was to chant “you’re just a shit Lionel Messi.” Touché.

The amusing thing about the chant is that Ronaldo doesn’t care. He’ll continue to pout, preen and poke fun, being safe in the knowledge that there are two players in that bracket in the entire world and the Portugal international runs Messi close.

For all Tottenham’s endeavor they deserved a goal over the two legs. In the end it wasn’t to be but they can look back over the season and be proud of the fact they were something that many other teams can’t manage – exciting to watch.

The night’s other tie saw Inter trying to overturn an equally insurmountable score line away at Schalke. Needless to say they didn’t even get close. The German side advanced 7-3 on aggregate over the two legs. Mercurial Spaniard Raul scored his 71st Champions League goal before laying one on a plate for centre back Benedict Howedes to put the result beyond doubt. Thiago Motta got a consolation for Inter and, as so often is the case, was sent off later in the game.

Man Utd may think they have a stroll to the final after not having drawn Barcelona or Real Madrid. Schalke are an unknown quantity at this level though and have shown that, on their day, they’re a match for anyone.