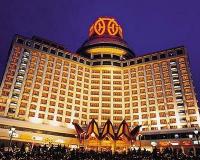 A new casino is being planned for the UK’s second largest city with the hope that it will generate around 1,100 jobs. After proposing to shut down three of their current locations, Genting Casinos are working with the NEC Group to bring Resorts World leisure to the city of Birmingham.

It is proposed that the 55,000 square metre facility, which would be on the same site as the city’s National Exhibition Centre (NEC), would include a casino, hotel, spa, conference centre, cinema, bars, restaurants and everything you’ve come to expect form a casino resort.

It’s unlikely that a decision by Solihull Council over whether or not to grant a large casino license will be taken until the conclusion of May’s local elections.

If approved it’s hoped that the casino could be up and running for gamblers as early as 2013.

Over the Irish Sea on the Isle of Man the latest company to take advantage of sexy Russian spy Anna Chapman have announced a new online slots game. Viaden Gaming has developed the fully HD and resizable “Catch Anna Chapman” slot.

The game, which can be played for money or free over at www.bigcasino.co.uk, offers an espionage themed five reel game where you even get to see some of the spy’s luscious flesh.

Heather Baker, UK spokesperson for Viaden Gaming said, “Viaden is always on the lookout for topical news angles to be featured in our games. Watch this space for more newsworthy casino browser games as well as apps for the iPhone and iPad.”