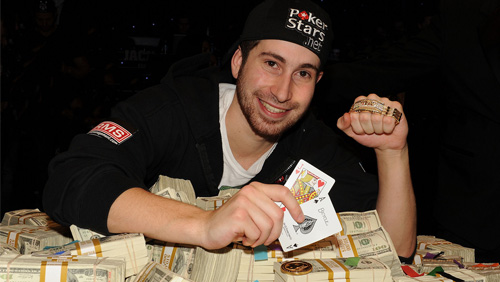 If you’re living in the world of poker, it may as well be New Years Eve today. So grab a few crates of cold beer, don your favourite novelty hat, and head to the biggest party you can find – especially if you’re from Montreal and happen to be called Jonathan Duhamel.

All this is because the 23-year-old Canadian last night won the 2010 edition of the World Series of Poker in Las Vegas. Duhamel had gone heads-up with Florida-native John Racener, 24, and never lost a chip lead of almost six-to-one over his competitor.

Both men shot to fame as online players and the rookie Duhamel becomes the first Canadian to take a WSOP title, and a cool $8.94million. When his win was announced his Montreal Canadiens jersey-clad support rose to their feet as plans for the largest poutine in the history of Las Vegas was announced.

Racener is no mug either, as he took home $5.5million. The difference between the two though…Racener will be forgotten almost straight away. That fate won’t befit Duhamel for at least another two months.