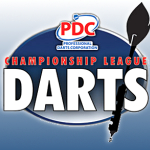 Championship League Darts is streamed exclusively live around the world through 16 bookmakers’ websites, as well as to PDCtv subscribers at the PDC’s official website.