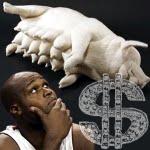 So despite the triple-digit millions he hauled in during his NBA career, former star-baller Antoine Walker is in a deep financial hole. Walker has sunk so low that he’s offering up his diamond-encrusted Miami Heat championship ring to the highest bidder. Shades of what T.J. Cloutier went through, although somehow we doubt Cake Poker’s going to ride to Antoine’s rescue. Walker (and a lazy media) are laying most of the blame for his financial fall at the door of his gambling habits, but look a little deeper and you’ll discover that the guy carried around a 70-person entourage even after his playing days were through, and as Abraham Lincoln once remarked, that’s just too many pigs for the teats. Read more.