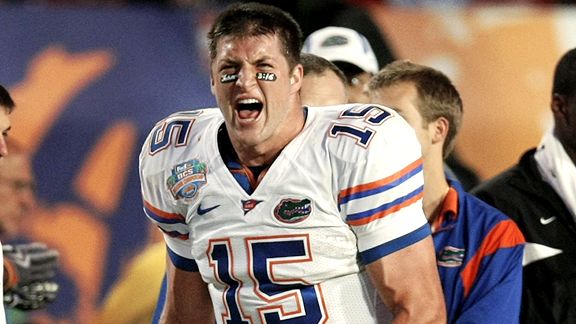 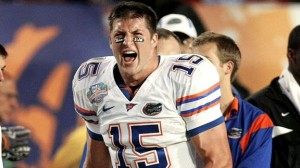 With today being Tim Tebow’s Pro Day, and the enormous support he’s receiving from Florida fans, certainly NFL teams are taking note. Also taking note are all the gamblers trying to pinpoint where he might end up in the draft. Read more.

Let’s be real though, Tebow does have his shortcomings as a Quarterback. In college he was amazing, no check that, in college he was a legend, but the NFL is a different animal. In college Tebow was pretty much bigger, stronger, and had more heart than everyone else. He could run over guys and win on his pure determination, leadership, and toughness. The real questions for Tebow are what can he take with him to the NFL, and what does he need to add.

It doesn’t take a NFL expert to see the flaws in Tebow’s throwing mechanics. It’s a long release and it’s not always the sharpest ball, he probably wouldn’t have a chance to get that off in the big show. But this is to be expected, Tim Tebow is not your average quarterback. The other question is, will he be drafted to play quarterback? The guy is a shit brick house, he could probably play a number of different positions with his athletic abilities and his will to succeed. But its that will to succeed in Tim Tebow that makes me a believer that he’ll be able to take on any position he puts his mind to.

When he stood on that podium and apologized to Gator nation for a loss and promised it wouldn’t happen again, ( and it didn’t that season) that’s when I jumped on the Tim Tebow band wagon, been a fan ever since. I think if Tebow get’s drafted as a quarterback, he’ll learn, make the adjustments and be successful at the NFL level just like he has been in anything the guy does in his life. By many reports, he’s already shortened up that release and who’s to say that he won’t continue to improve, I’m not going to doubt him. But I’m not the one with a valuable draft pick to make, and one NFL team is going to take him, the question is who that team will be.

There’s one team that comes to mind that should take Tim Tebow as soon as they have the chance to do so. That team is the Jacksonville Jaguars. Yes they have Garrard at QB right now, but who’s really expecting Tebow to start right away. If for no other reason, Jacksonville should take him because of what he would mean to that city, that state and ultimately that franchise. To put it in perspective, Tim Tebow’s pro day was expected to draw in the neighborhood of 10,000 people. For a pro day, that’s bananas. You put Tim Tebow on that Jacksonville Jaguar squad and you’re filling those stands guaranteed. Tebow is Florida native, his following is cult like, Jacksonville can’t really go wrong with him. Maybe it’s a slight gamble, but he’ll have a good NFL coaching staff and a veteran QB to string him along.

Let’s be real, Jacksonville needs something new, last year wasn’t one to remember. That all could change this year if they take Tebow, at the very least it’s a good business decision.