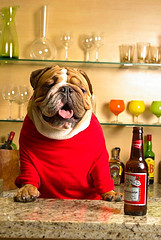 It must be great living in the USA, the Land of the Free. At 18 years of age you’re old enough to join the army and kill people, not to mention yourself, in the name of your country but you can’t go down your local boozer for a couple of sherberts until your 21. After all, that would be bad for you.

My transatlantic friends tell me that you can buy a shotgun at 18, and also legally get behind the wheel of a car when you’re 14 but, if you’re 20, woe betide you if you have a drink. Well, it’s dangerous innit?

The US government is only looking after your best interests, you see, which is why, in 2006, it decided to introduce the Unlawful Internet Gambling Enforcement Act (UIGEA), protecting its citizens, and particularly the young, from the perils of gambling online. This way, the good people of America can be protected from themselves and instead devote their time to more responsible and socially acceptable pastimes like playing World of Warcraft, shooting guns in the woods or joining the army.

I will say that Barack Obama’s government appears at least seen to have seen the light by delaying the enforcement of the UIGEA. I’m told there was an earthquake in the town of Puritan, Middle America, where the townsfolk collectively choked on their Cornflakes when the delay was announced nine days ago. Fortunately nobody died, but if you believe this rubbish website, it’ll only be a matter of time before America’s young go to rack and ruin should the ban be lifted.

This article just goes to show that the anti-legalization lobby is about as on the case as Tiger Woods’ wife. Firstly, in the unlikelihood that any youngsters get hold of their old man’s credit card and gamble his life savings away, online gambling companies have a policy of reversing any such transactions. But, you see, by the same token if a kid finds the keys to his Dad’s car, he can always take it for a drive, can’t he? But does he?

And when it comes to online poker cheating, any website worth its salt will go to great lengths to stamp out collusion. These companies don’t need the FBI to get involved for fuck’s sake, they have entire departments devoted to monitoring everything from betting patterns to swearing. Only last year a mate of mine got chucked off VC Poker for using that nasty F-word and questioning my ancestry after I beat him with a lucky river card and asked him if he knew that he was my bitch.

It’s classic fear mongering. Not quite as bad as this bell-end. Look at what this guy blames on online gaming…money laundering, terrorists, crack cocaine, speculative financial bubbles wiping out the financial markets, people losing all their worldly possessions, the sub prime mortgage collapse, bankruptcies, street crime, employee embezzlement…the only thing missing is the clear link between online gaming and bloody cannibalism. This guy isn’t fit to run a bath mate. Thank God Obama is the President and not him.

Any American economics professors concerned that the money being generated from online gambling is going overseas, should maybe out their calculators and work out how many millions the US government will stand to make from taxation if there was a system in place that allowed US companies to compete in the industry.

Why the fuck do you think Obama is considering a U-turn in the first place? To cure homelessness.