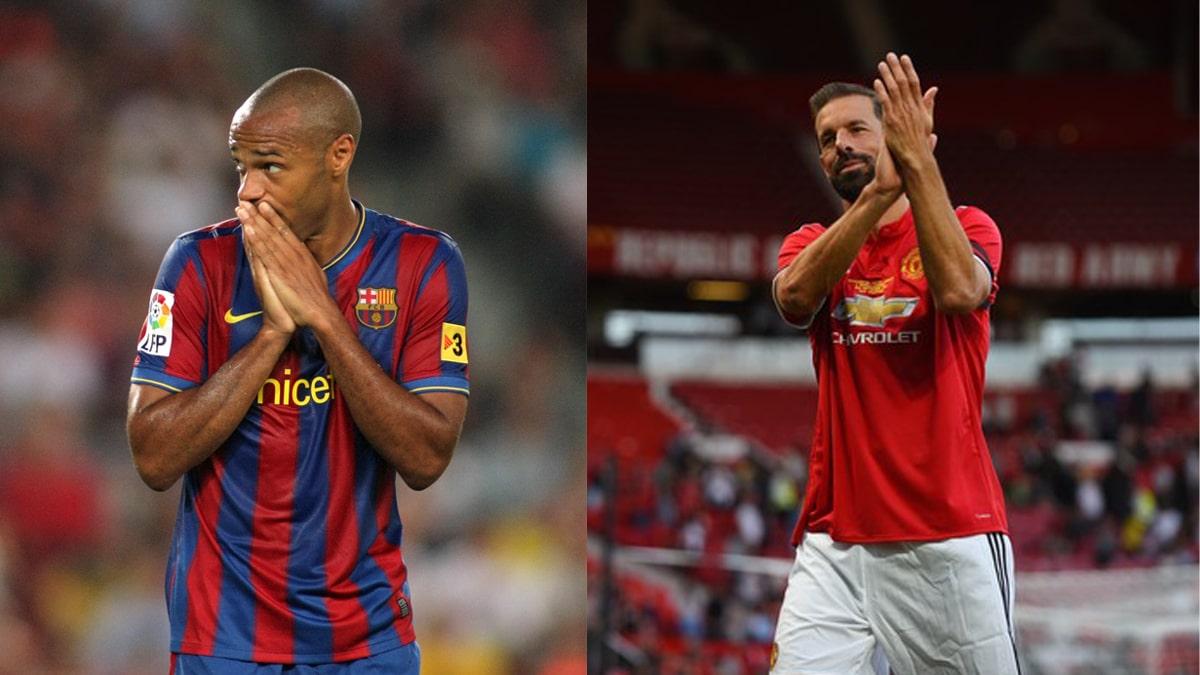 Strikers are at a premium in the modern game. To be successful as the top of the pitch at the elite level of the game, you need pace, power and deadly finishing. Two men who became legendary strikers at Arsenal and Manchester United at the height of their 1990’s and 2000s rivalry were Thierry Henry and Ruud van Nistelrooy.

How do the two men’s records compare and why do the paths of their very different careers intersect in so many ways? Let’s look at the story of two men who instinctively knew where the goal was, and more importantly, how to find it on an incredibly regular basis.

While both van Nistelrooy and Henry would become strikers with whom the first thought associated with them is goals, that wasn’t always the case. Van Nistelrooy began his career playing for Den Bosch in Holland, and it was while he was there that he changed from being a central midfielder to a central striker, preying on the ball and learning the art of finishing.

Taken on by the first team, van Nistelrooy scored just a few goals in his first full season, but the seed had been sown. He was going to be a striker, not a midfielder and he wasn’t the only one to be going through that change.

Over in France, Thierry Henry was taken on at the infamous INF Clairefontaine Academy, where many French players made the grade. Despite poor grades at school, the 13-year-old Henry, who had been brought up in the tough Paris suburb of Les Ulis, was taken on by Monaco after they witnessed him score all six goals in a 6-0 victory.

Having grown up in two years of youth team action at Monaco, it was time for Henry to graduate with honours, and he would move through the gears as a Monaco player in the five years to come.

While Thierry Henry became a name at Monaco in Ligue and his home country, scoring a total of 20 goals in 105 wasn’t setting fire to the goalscoring charts. Over the same period but a year earlier (1993-98), Ruud van Nistelrooy scored 30 goals in 100 games for Den Bosch and Heerenveen, making 69 appearances for the former and 31 for the latter.

Van Nistelrooy was hot property, and would sign for PSV Eindhoven for €6.3 million, and in 1998/99, while Manchester United were winning the treble.

Just as it looked like Ruud van Nistelrooy was heading to Old Trafford in the summer of 2000 in a multi-million-pound move, this happened during training with PSV Eindhoven:

It was agony for van Nistelrooy, whose injury would cost him a year of his career. While the Dutchman would face the long grind back to full health, Henry was playing in Serie A for Juventus, and scoring three goals in 16 appearances, wasn’t having the best of times.

Playing mainly as a left winger cutting inside, Henry wasn’t getting the goalscoring chances he needed to become a legend in any way, too frequently dominated by the top Italian defenders.

Henry did, however, learn the art of drifting in from the left and using his accuracy to deadly effect.

Later than year, Thierry Henry signed for Arsene Wenger, his former Monaco manager when ‘Le Professeur’ took the reigns at Arsenal. Costing £11 million, Henry was at first doubted, especially after failing to score in his first eight games for The Gunners.

Van Nistelrooy would eventually make his move to Manchester United in the summer of 2001, costing the Old Trafford club £18.5 million, a club record at the time. Could he succeed? Would he be fully fit?

Both Arsenal and Manchester United fans were about to see their star strikers really hit the groove.

United and Arsenal would trade titles for many years in the Premier League, but while Van Nistelrooy and Henry were up against each other, it was perhaps the last great golden period of the Premier League where football captured the imagination of the nation.

In the 2001/2002 season, Henry got the better of it, spurring Arsenal on to a historic double. In 2002/2003, Van Nistelrooy’s goals helped United to nine wins and a draw from the final 10 games and saw them overtake Arsenal on the home straight.

Van Nistelrooy’s record as United’s main striker is phenomenal, with the Dutchman scoring so many goals from inside the box as to become the definitive striker of the Sir Alex Ferguson era. Often finding the corners with unerring accuracy, the Dutch forward scored in 10 Premier League games in a row, a record which stood until Jamie Vardy went one better against United over a decade later.

Van Nistelrooy scored some incredible goals during his United career. Here are 10 of the best.

Thierry Henry, on the other hand, was a talismanic player for Arsenal all over the pitch, and he showed that to devastating effect when he single-handedly waltzed through Liverpool’s backline to score one of the best goals the English Premier League has ever seen in 2004 on the way to Arsenal completely an improbable unbeaten season, with 26 wins and 12 draws completing ‘The Invincibles’ dream season.

Henry would have disappointments in his final days as an Arsenal player, however, and possibly none more so than one of the defining moments in the North London side’s entire history.

1-0 up on Barcelona in the UEFA Champions League final, Henry was put clean through with just Barce ‘keeper Victor Valdes to beat. A chance to put Arsenal two clear was spurned by the usually prolific striker.

Barcelona went up the other end and scored two goals to win the European Cup, and Arsenal have never been back to the final in the 14 years since that day, preserving the fact that they have never won Europe’s top trophy – staggering given how continental Wenger changed their style to.

As Henry was about to trade North London for the very side he failed to help The Gunners beat, sold to Barcelona in 2007 for £16m, Ruud van Nistelrooy had a training ground bust-up with a young Cristiano Ronaldo, allegedly telling to ‘run to Daddy’ when referring to United coach Carlos Queiros. Ronaldo, however, had lost his father eight months earlier and was distraught.

With the future ‘CR7’ brand in its infancy, Ferguson sold van Nistelrooy to Real Madrid for €14m and both the two top strikers who had defined a Premier League era were bound for Spain.

In La Liga, both men would find that they could be a huge success despite leaving the Premier League behind. Henry would win the title twice, as would Van Nistelrooy for Madrid. The Dutch striker’s record of 46 goals in 68 games for Los Blancos was great, but injuries were creeping into each of his four seasons, and in the end, they forced him to leave, his ratio intact, but his knee finally failing him.

Van Nistelrooy did, however, score 25 goals in a La Liga season to win the Spanish ‘Pichichi’ award for the top goalscorer, something Henry couldn’t master with Messi in the same team.

Henry’s record with Barcelona was impressive too, although not quite so integral to their success, the French superstar scoring 35 goals in 80 appearances. Henry would, however, win the European Cup at long last, being part of the team who triumphed against Manchester United in 2009, although more of a bit-part player by then.

While Ruud van Nistelrooy had enjoyed a stellar career, he would play for just two years more, scoring just 16 more goals across 64 appearances for Hamburger SV and Malaga in the German Bundesliga and La Liga respectively.

Henry moved to the New York Red Bulls and had a mite more success, notching 51 times in 122 run-outs, including a final goal for Arsenal when they played Leeds in the F.A. Cup.

Both men helped define the art of goalscoring across Europe and will be remembered by fans forever at their respective English Premier League clubs.