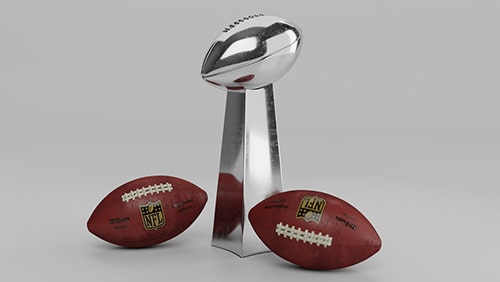 The forthcoming NFL season is going to notoriously difficult to predict. So what would you say I we told you that the path to Super Bowl glory had already been mapped out? Don’t worry, we’re not venturing in the direction of Russian conspiracies or pre-election fixes. The good folks at ESPN have simulated the 2020/21 NFL season and come up with the team they think will lift the Vince Lombardi Trophy on 7th February next year.

It’s a very hard predicting the outcome of a single game of American football, so to simulate an entire season takes a lot of work indeed. Is it possible to be successful, though, and do the odds tally with the forecasts? Let’s take a look at exactly how it breaks down.

In the AFC, the predictions of the ESPN super-computer have the Ravens and Steelers both making the post-season from the North, with each side expected to get 12 wins from their 16 fixtures. That’s a tall order for the very best teams, but at 7/1 to win the 55th annual Super Bowl, the Ravens are favoured by the bookies ahead of the Steelers, available at 25/1. At those odds, perhaps the Steelers are the better bet.

In the AFC South, forecasts call a tight division sending the Houston Texans (60/1) through with the Indianapolis Colts (33/1), with both the Titans and Jaguars missing out, the latter to the tune of just three regular season wins, something that would give them the NFL draft’s famous ‘first pick’ for 2021.

In the AFC East, everything points to the Buffalo Bills (28/1) to win and make the playoffs at the expense of the Jets (100/1), Patriots (25/1) and Dolphins (125/1), with the New England Patriots in particular to be disappointed if the prediction that they will finish 3rd comes true.

When it comes to the AFC West, the ESPN predictions extend to two sides making the playoffs, with the Chiefs – unsurprisingly, given they’re 13/2 favourites to win the Super Bowl outright) marked to take the divisional title with 11 wins from 16 games, with the Chargers (50/1) edging out the Broncos (55/1) after both teams win 8 and lose 8 from their regular season fixtures.

The predictions see Tom Brady and Rob Gronkowski take the Tampa Bay Buccaneers all the way to the Championship Round, with the Cowboys making it all the way to the Super Bowl itself, where the model predicts a 42-17 victory for the Kansas-based franchise. With the Baltimore Ravens tipped to lose out only to the Chiefs in the Championship Round, last season’s Super Bowl LIV runners-up are feted to lose out in the Divisional round to the Cowboys. Why Dallas are so heavily-tipped when their odds of 20/1 are longer than those for the Chiefs, Ravens, 49ers, Saints and Buccaneers is possibly due to NFL Draft picks CeeDee Lamb, Trevon Diggs and Neville Gallimore improving the Cowboys roster immensely.

Either way, the predictions make very interesting reading when stacked up against the current odds, which predict the Kansas City Chiefs will take consecutive Super Bowls. As we’ve already outlined in our article about what happened to the last 10 pre-season Super Bowl favourites, that very rarely happens.

* name to be announced after ‘Redskins’ deemed inappropriate.